It rained lightly during the night but the gusting wind kept the tent dry. Todays forecast was for winds 40 km/h around lunchtime so we were up before daybreak and on the road by the time it was light, we did get a nice sunrise though.

Today’s cycle was a short one to the next town along the coast, Arno Bay only 34 km away. Using our bike lights for the first time in quite a while as it was very dull under the heavy cloud cover.

Lights and cloud on the road

It was very quiet until about 9.00 am then the traffic steadily increased to a level similar to yesterday.

The riding was not actually too bad, with a strong crosswind a little more care was needed at times, but overall we made good progress.

Look how easy it is to ruin a lovely picture

The road was undulating without being difficult, it even had a good shoulder for a few stretches. The 34 km soon went and the huge white grain silo signalled Arno Bay ahead. Turning right off the highway then cycling down into town past a grocery and general store that had now closed (only last week we found out later) right to the sea front where there was a hotel, cafe / store (only the very basics available) and the caravan park.

The caravan park cost $31, we could pick anywhere we wanted as it is so quiet here, our chosen spot is tucked in next to a cabin to avoid the wind. The site is clean, showers good but the camp kitchen area is poor, it needs a cooking ring and toaster and maybe utensils / cleaning stuff.

As we were so early to the site and feeling hungry it was time to try the food in the hotel, it was well cooked and tasty but everything was very “microwavy”.

Cheers, it would be rude not to taste the local beer

After a short lie down, it was off to the jetty (next to the caravan park) to try our luck with the fishes. Using prawns as bait we attracted wrasse, catching 6 up to 25 cm long not good for eating though. Then we swapped to the squid jig and got our first squid! This was rapidly cleaned and gutted, then simply flash fried in seasoned butter, it was lovely, one squid makes a perfect starter to a meal.

This is why we now carry a bucket! Not for wine overflow as suggested. 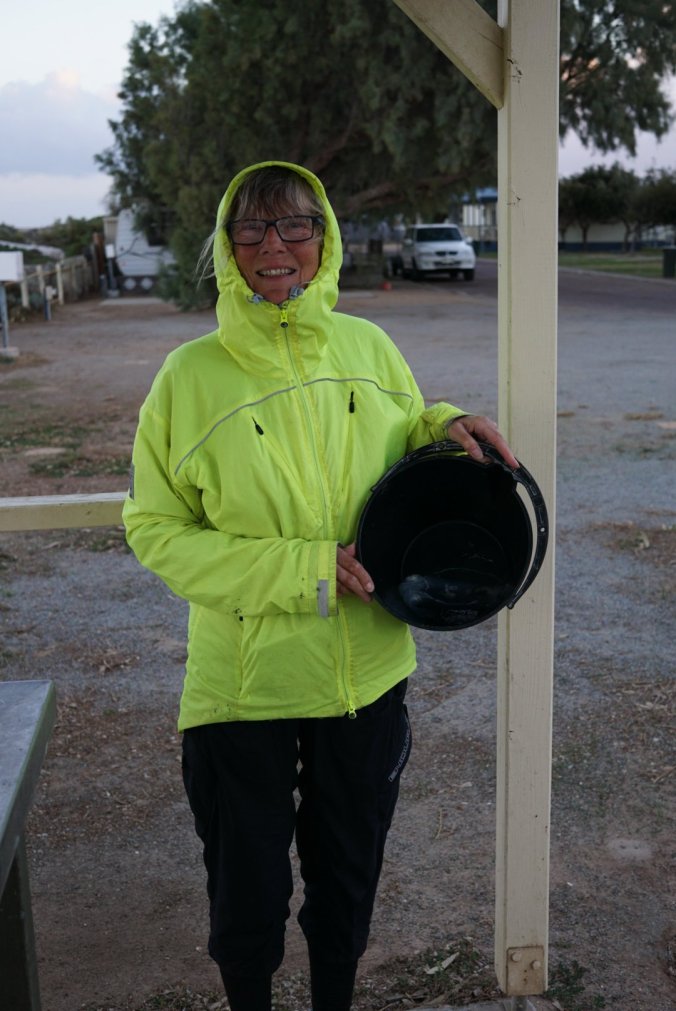 Squid and fish carrying bucket at the ready

We sat a while enjoying the last of Janet’s 4 litre bag of wine before finishing the night by eating all the cheese and biscuits we have, not really too sure what we will have for lunch tomorrow though.