As it was only had a short day today we tried to delay our start but still managed to leave by half nine, not very good at stopping in bed.

We continued along the small beach road, no traffic and lovely sea views this continued for a while until there was an army checkpoint, we now know the route planner cannot distinguish between a public road and one through the middle of an Army Base!

Cue the cat photograph, feeling very pleased with itself

END_OF_DOCUMENT_TOKEN_TO_BE_REPLACED

Another restful nights sleep and we were good to start today’s cycling. What an excellent day it turned out to be.

The first part followed the main road, it was a good surface with a good shoulder and almost no traffic, win win. As an extra bonus much of it was next to the sea with some nice beaches.

END_OF_DOCUMENT_TOKEN_TO_BE_REPLACED

Leaving Pantai Remis along the 60 through the middle of town we made a quick stop to pick up some water from the 7/11 then continued on the main road. 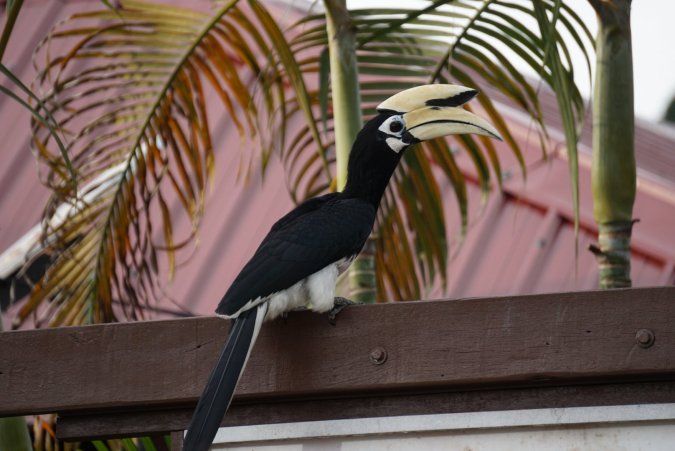 END_OF_DOCUMENT_TOKEN_TO_BE_REPLACED

There is one hour time difference between here and Thailand means it is light at around 7:30 am so we end up leaving around 9:30 am (or 8:30 am Thai time). 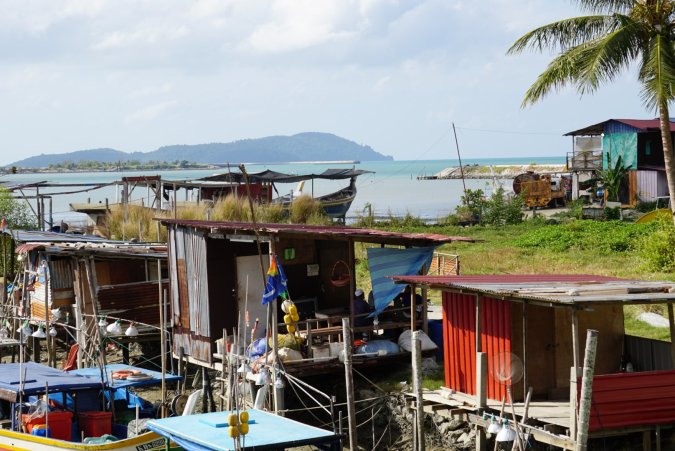 Just past the airport

Even though the port is only 20 km away if we cycle the most direct route we decided to circle the island with a more substantial 50 km. The extra traffic on the roads still seems strange, lots of cars on the road still seems strange and no shouts of “hello” seems very strange. Time will tell if this is normal or specific to a tourist island like this.

We cycled past the airport then up one largish hill following the coast. There were several troops of monkeys along the roadside, waiting for any cyclists to expire before pouncing on them, we made it past un-pounced on.

Monkeys on the move

The road then cut across the island and it got a little bit quieter here, until it reached the north coast where there was a lovely empty beach and a complete lack of anything tourist related. We followed the north coast for a while then cut back down to Kuah where we are stopping tonight.

In amongst all the beauty stands a Lafarge cement factory 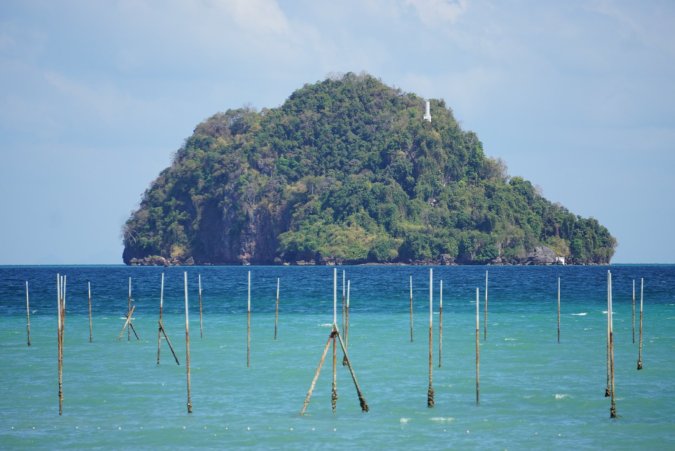 Off the north coast 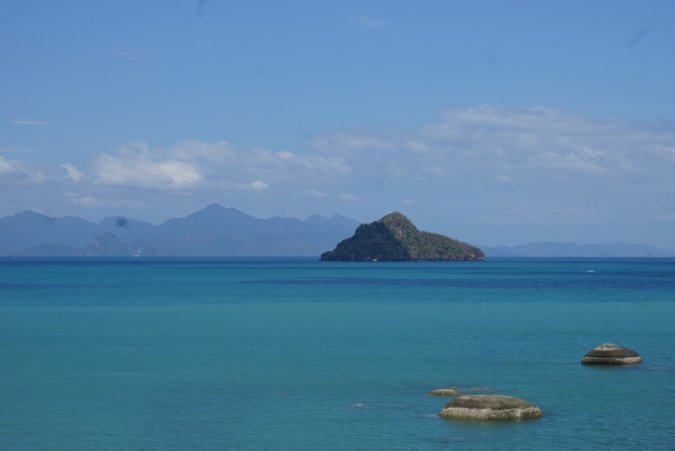 More off the north coast

In Kuah we easily found the Milvus Hotel when we have a small but comfortable room. After a shower we walked a couple of kilometres to the port building to double check on taking our bicycles onto the ferry, no problem at all. To get to the port building you walk through Legenda Park, with lovely ocean views, then past Dataran Lang or Eagle Square with it’s massive 12 m high statue of an eagle the island’s emblem. According to folklore Langkawi’s name came from two Malay words – ‘helang’ (eagle) and ‘kawi’ (reddish brown): hence lang-kawi.

On our way back we stopped for some food, tonight it was roti. The roti is malay for bread in this case a flatbread originating from British colonialism where many people were brought here from Tamil Nadu in India bringing their cuisine with them. The food was lovely, we are going to eat a lot of these! 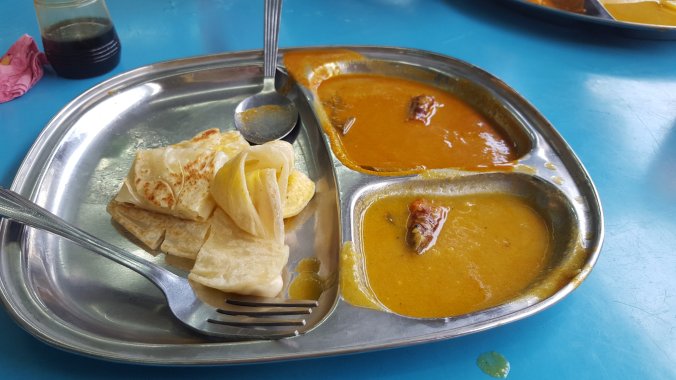 This was the second night / day here, spending the morning and lunch just relaxing, sitting around doing some reading and planning the next couple of days. 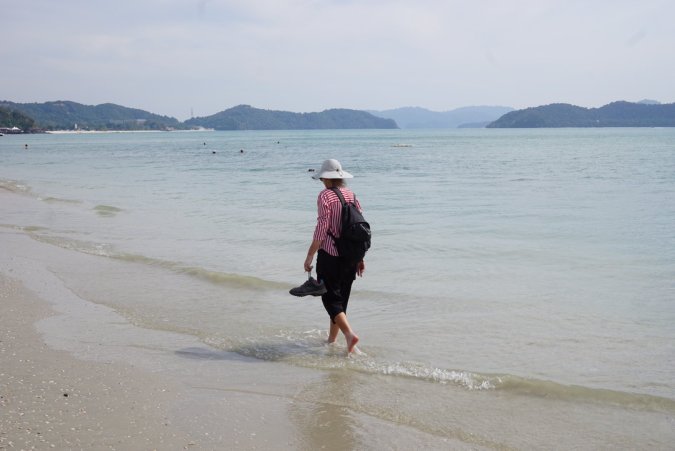 END_OF_DOCUMENT_TOKEN_TO_BE_REPLACED

Today is the last day in Thailand, we are really sad to be going but it is time to move on. Thailand has been a fabulous country to visit and a brilliant place to cycle, we recommend it to anyone, please visit. The people are friendly, you will always hear a shout of hello and see a smiling face. You can have the madness that is Bangkok and the beauty and quiet that exists just off every main road. Goodbye.

A view of Malaysia

END_OF_DOCUMENT_TOKEN_TO_BE_REPLACED

Up and out by 9:00 am, it had been lovely stopping here in Sikao, the resort owner was very kind.

We left Sikao on the road out to the coast, it was quiet all of the way to Hat Pak Meng where it turned South right at the beach.

END_OF_DOCUMENT_TOKEN_TO_BE_REPLACED

We had planned to cycle down to Old Town Lanta stop there for a night and get some sort of ferry across to the mainland from there. All the best laid plans …. in fact we started off the day by walking down to the pier area and asking about a ferry to the mainland, there is only a small speedboat which cannot take bicycles going eventually to the mainland. That nice bridge brought the demise of a number of ferry routes as it is now easier to drive.

END_OF_DOCUMENT_TOKEN_TO_BE_REPLACED

A genuine lazy start today, 10:00 am, not our usual lazy start and we still start cycling by 8:30. Today only being 20 km from Ao Nang one tourist town to Krabi another tourist town (but still manages to be nice).

END_OF_DOCUMENT_TOKEN_TO_BE_REPLACED

After checking ferries and where they go to and depart from, our choice ended up as the 3:30 pm large speedboat from Tha Manok pier to Nopparat Thara pier Ao Nang.