Saturday 10th December (Sue’s birthday) and I got an early start I had agreed to go on a cycle ride with Thuan and a local club. We left in the misty gloom of a foggy morning cycling down to the Chinatown Goldline Station where $1.75 got us 20 miles to Monrovia.

Here we joined a group of 11 other riders and set off along quiet roads for about 20 miles where we stopped halfway at an Armenian Bakery. One coffee and baklava (which was really nice and I am sure very healthy) later we were on our way again. This time making our way back towards the start point another 20 miles away, the roads were a lot busier now normal people had got up and out! It was a nice ride out, I got to speak to several other cyclists and the time just flew by.

We were then on the way back to Chinatown and up to Thuan’s house. A total of 47 miles ridden. On Sunset Boulevard today had been the Echo Park Parade, the road was still closed off when we got back.

Meanwhile Janet had been busy while we were out (she has made me write that part), walking down to the Army Surplus shop (now selling earthquake kits as well) where they have some canvas holdalls which we have to use on the plane. All airlines charge per bag so we put 3 bags into one bigger bag.

The Echo Park Parade was on and the road was crowded with people sitting in the sun enjoying the many sights and sounds, a real carnival atmosphere. Janet got back first but could not open the front door so had a very leisurely hour waiting for us to arrive at 2.00 pm. 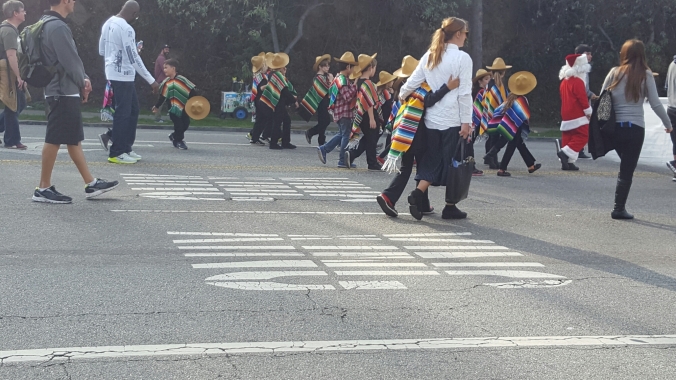 Janet’s bike was the first one to be packed up, it was just over 50 lbs all done, just right as we have 55 lbs maximum. By now it was getting dark so we finished and while Thuan prepared a meal we popped to the supermarket for some drinks and shopping.
The meal was excellent, a Vietnamese hot pot, very similar to the Mongolian one we had in San Francisco. There was a large central pot of stock on a gas fired stove in the centre of the table. Into the pot we placed fish, beef, chicken and prawns. Once cooked they then went onto some rice paper which had been quickly soaked in water, to this was added lettuce, mint and vietnamese mint it was all rolled together in a sticky roll! You then dipped this into a sweet chilli sauce and ate it. Of course we had drinks, some wine, beer and Korean Vodka  (the closest thing to Vietnamese vodka you can buy here). We had a Japanese ice cream to finish, not too sweet and covered in a dough.

We went to bed feeling very full and content, a really lovely meal.