Today has no cycling but lots of walking (or hiking if american) and horse riding, yes you read correctly horse riding. There is a walk to the top of Angels Landing I wanted to do but it has 1000 ft drop offs something Janet is not interested in doing, but there is a stables at Zion Lodge offering horse riding down the gorge. So that was decision made.

We caught the shuttle to Zion Lodge (Janet) and The Grotto (me). Once off at The Grotto I started the 2.5 mile hike to the top. The path followed the river to begin with before turning towards a seemingly sheer cliff face. The path itself is about 2 metres wide and concreted so very easy walking (you notice the ease at which I switch between hike and walk, I am slowly turning american). 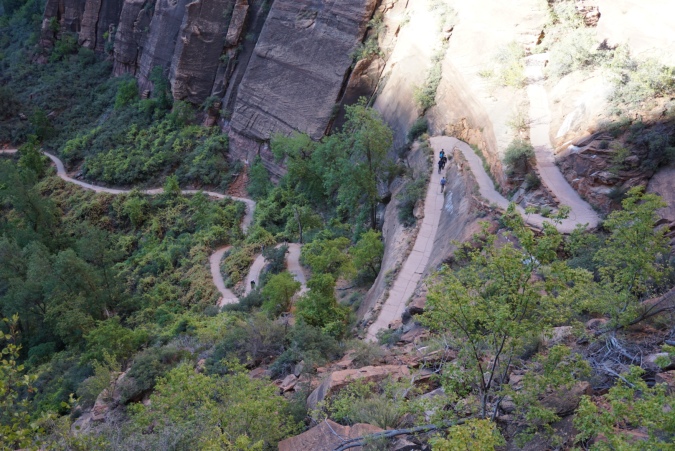 It then started to zig zag up the wall of the canyon quickly gaining height. After this it enters a hidden gully and you have a flat section. Then come the final set of switchbacks, 21 in all but very steep, these take you to a saddle before the final climb up to the top. So far all on nice wide concreted paths. 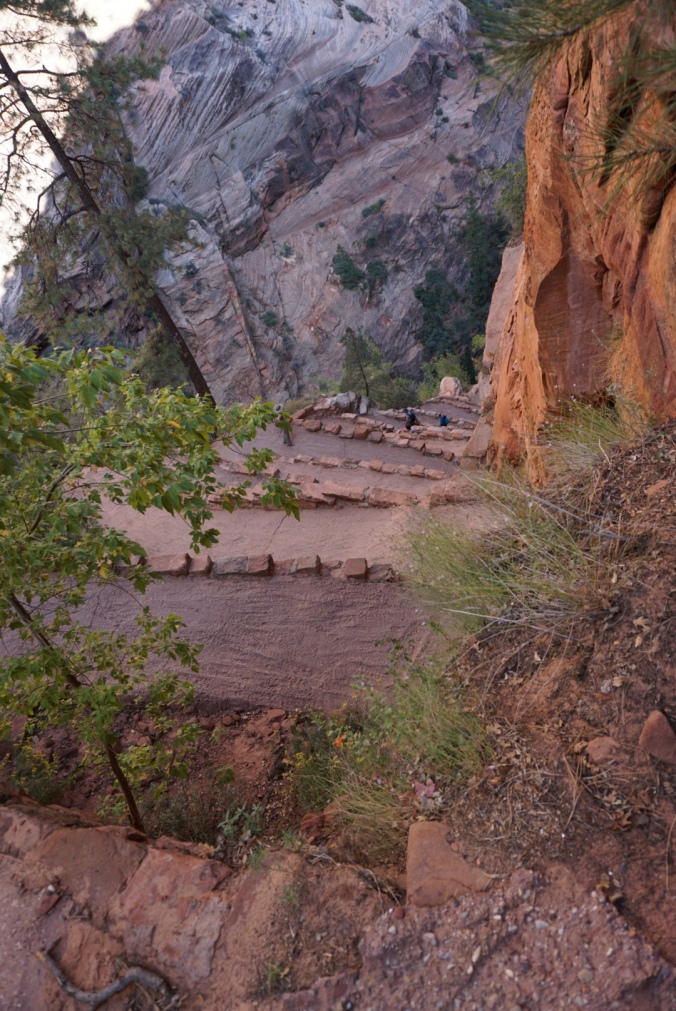 It was here quite a few people stop, the next quarter of a mile is very steep on sandstone with chain often fixed to the rock to assist you in your ascent. It is very exposed and you are moving in single file. Then you arrive at the top to simply stunning views all around. I was fortunate enough to see a Californian Condor (very rare and endangered species, they did drop to only 22 birds, almost extinct) circling below (yes below that is how high it is) I could only get a very fast picture so it is not very good. The stubs part way along its wings are numbers which identify each bird. 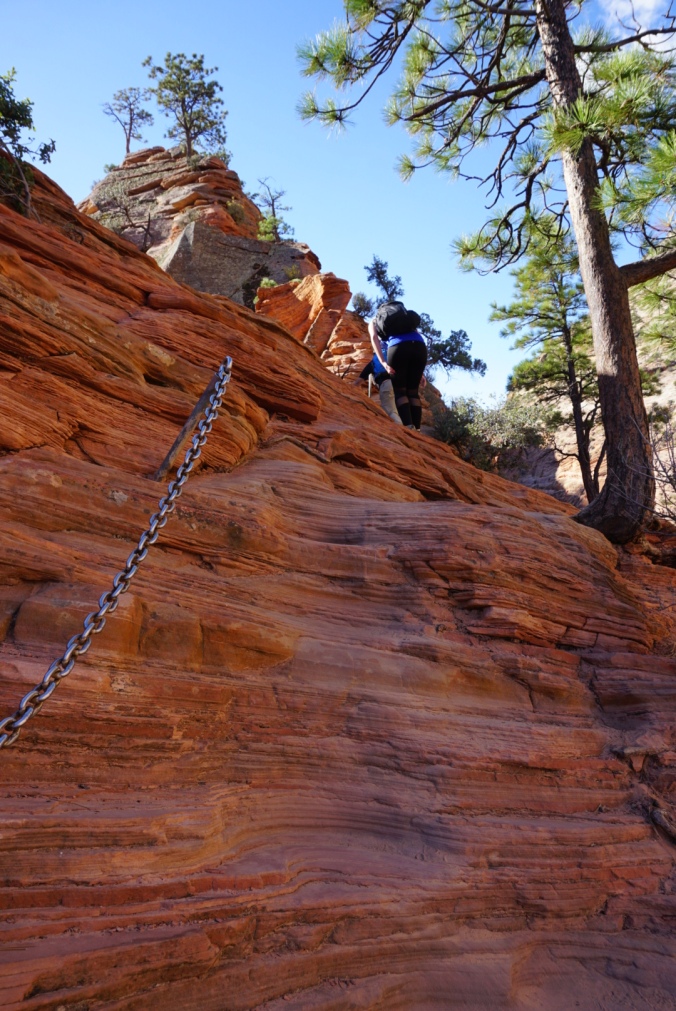 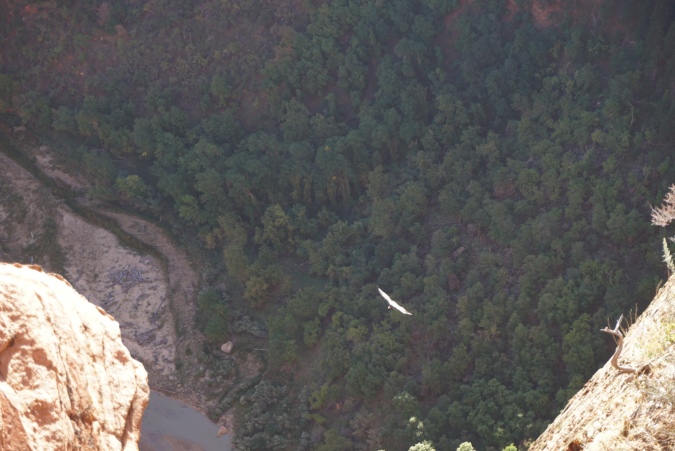 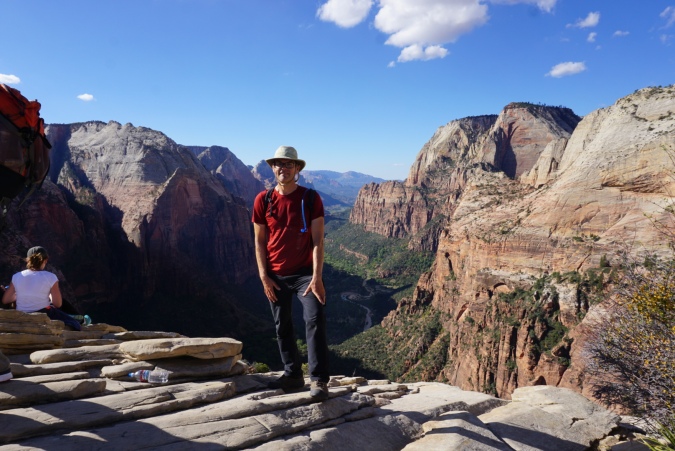 Then the descent, which was easier that I though (probably a little used to the rock and path now) often waiting for groups to climb through a section before I could go down. 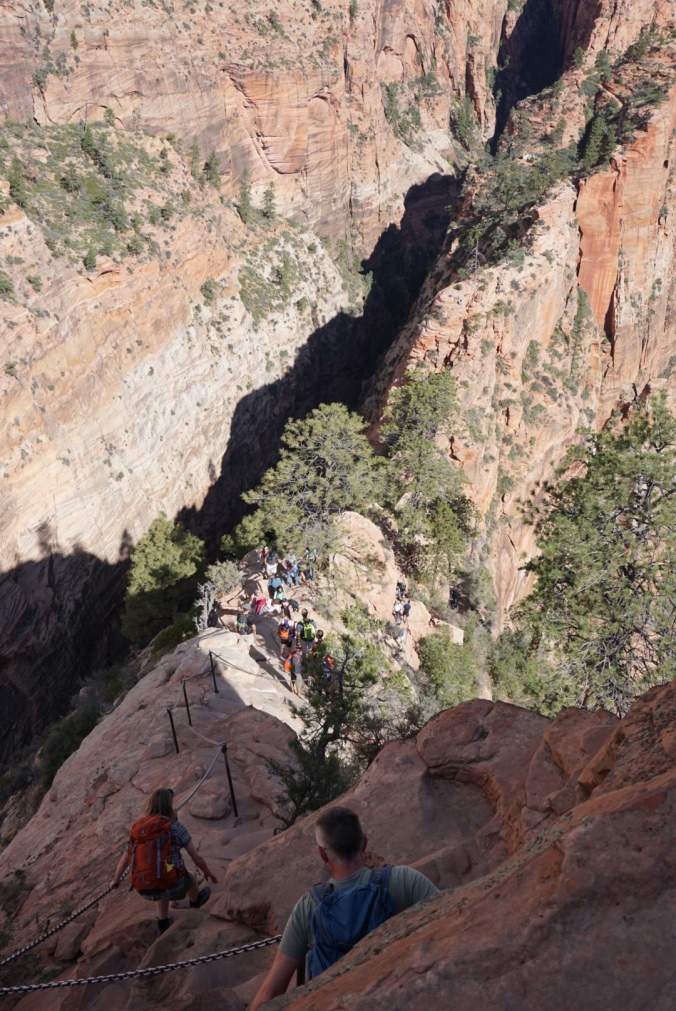 It was over all too soon and I was back on the shuttle heading to the campground. Janet was already there having only just arrived back at the campground about 15 minutes earlier.

On the horse ride, the first decision was a 1 hour ride or a 3 hour ride? A 1 hour seemed best, I was given a horse called Fancy, the biggest horse they had (were they trying to say something?). We trekked down a sandy path that follows the river, surrounded by the magnificent grandeur of the Zion sandstone cliffs. Half way around Fancy lost her footing and fell to her knees (again was the horse trying to say something?) My heart nearly lept out of my chest, but Fancy recovered quickly and continued on, it took me a lot longer to recover. By this time I was very happy to have chosen the 1 hour ride. I think I enjoyed it but have yet to buy a stetson and spurs.

We took a walk into the town and had a shower (the campground does not have a shower) for $4.00 for 5 minutes. Then we shopped, getting some larger puncture repair patches as we had a squirrel try to chew through one of my panniers (I say try, it actually did) so it needed repairing.