After looking at all the options we decided to head down to the airport today. Our flight to Bangkok which for all PE teachers out there is in Thailand leaves tomorrow at 9:50 am but to get a train to the airport with our bicycles would mean catching the 5:45 am train. 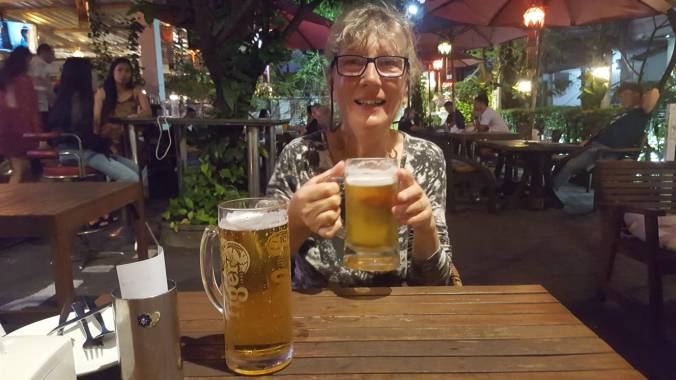 Rather than pay a nights accommodation and rush to get to the station we went today, checking out as late as we could.

It did mean several journeys with bicycles, luggage and bicycle boxes to get everything together at Kyoto main station. Here the bicycles we taken apart and boxed then we struggled to platform 30 which the direct train to the airport leaves from. 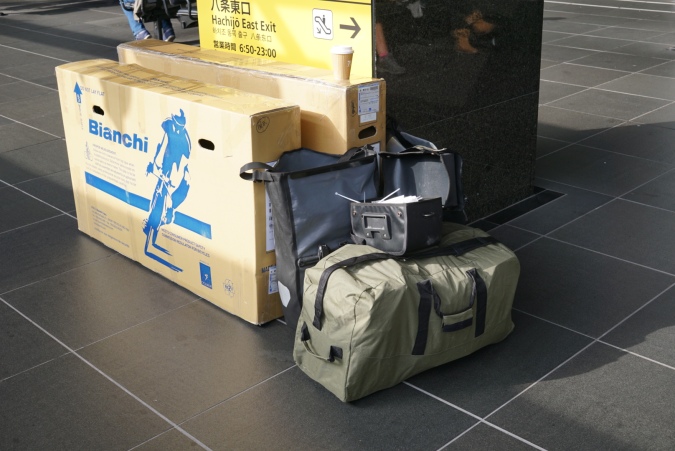 Our worldly belongings in two boxes and two bags

The train ready to leave 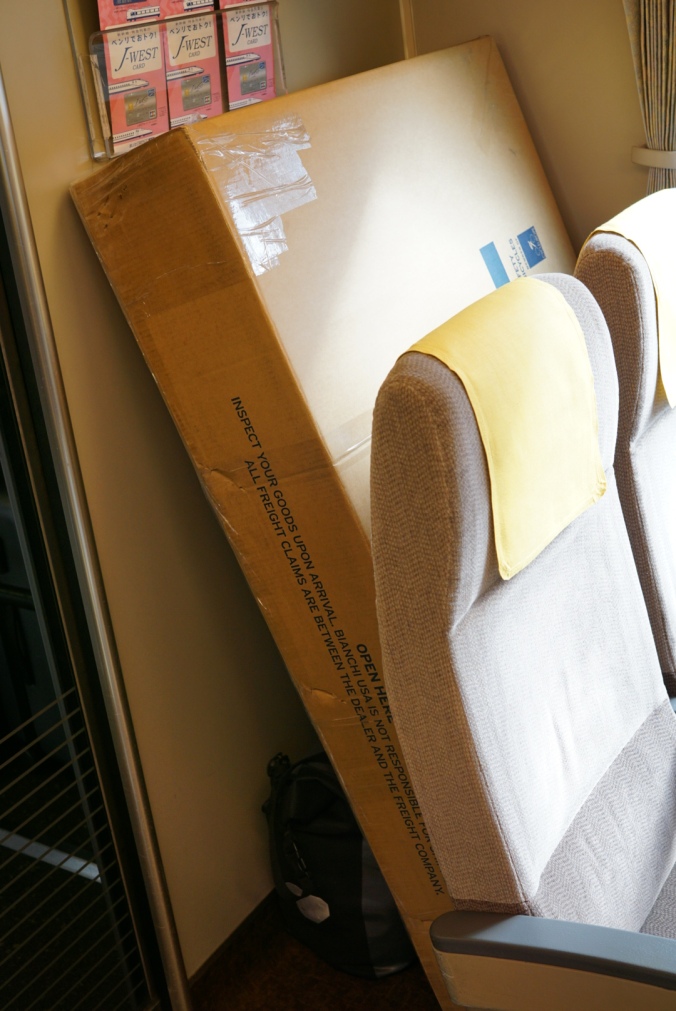 A nice storage space behind some seats

80 minutes later and we arrived on the island airport. Here there are trolleys for your luggage, no more struggling.

There is quite a good area of seats which you can sleep on, they will even supply you with blankets plus there is a shower you can pay to use (bring your own towel though).

Preparing for a long night

You could not have called it a restful night but we managed to drop to sleep on and off until at 6:00 am when we moved to the check-in area.

The check in was quite fast, they did check we had our onward flight from Thailand booked though, looking it up on their system.

Security and passport control were also a fast process, there is nowhere the level of security here as we saw in London and Sydney airports. Japan must consider Osaka a very low risk airport.

Breakfast from a shop

Then we were on the plane, an Airbus A330. It must have been a very quiet day for AirAsia the plane was only about a third full, this meant you had a row of seats to rest on if you wanted.

Six hours on and we landed at Bangkok Don Mueang Airport. The first hurdle was immigration, after an initial concern about the “visa free” entry we found the correct queue and were stamped for 30 days.

After a while we were reunited with our luggage and battled through the nothing to declare entry along with the whole world it seemed.

For once we were not picked on and welcome to the chaos of the arrivals hall. A visit to the ATM then we had some Thai Baht, then to spend some on a taxi to our hotel. Because of the bicycle boxes we had to take a minibus. But we got there through the Bangkok traffic, the scooter riders are mad here.

The hotel is very nice, and only a short walk away was a bar where we had a drink and food before an early night.

So much beer choice

Finally it is 34 degrees here, a welcome warmth after a lot of cold weather cycling.