More rain, thunderstorms and very heavy rainshowers late last night and this morning it has poured down since the early hours but we have that warm and dry feeling we wouldn’t have had in a tent.

Next on the list sorting out our banking etc then printing all the paperwork for our onward travels. We certainly know how to live an exciting life sometimes!

We had a final visit to Conjola Lake entrance but couldn’t spot any of the plover chicks maybe the White bellied sea eagle is now the fat bellied sea eagle. The beach had quite a lot of that effluent we saw from the boat deposited at the high tide mark, not very nice.

It continued to rain on and off which presents an ideal time for packing up our things ready for the flight out of Sydney Airport. Most of our things fit into two holdalls we have purchased and weighed around 18 kg per bag. The bicycles were next, pedals off then the bars get turned around and some bubble wrap taped to anywhere vulnerable, lastly into a very heavy duty plastic bag (in this case a mattress storage protector bag) with around a mile (only an approximate measurement) of packaging tape.

While doing this I noticed rather a lot of play in one of the Rohloff hubs, the bearing seems to have heavily worn on the non drive side. I put this down to the oil leak which has been present from new and SJS blamed air pressure and overfilling as reasons rather than fix it.This time I contacted Rohloff direct and will be sending them a short movie clip showing the fault, hopefully they can offer something. A job to do when we get to Korea.

As a extra bonus, Colin was a pioneering surfer, surfing when it was not so trendy, he had a surfboard factory hand making wooden boards (before plastics were even thought about). Each one is a work of art. 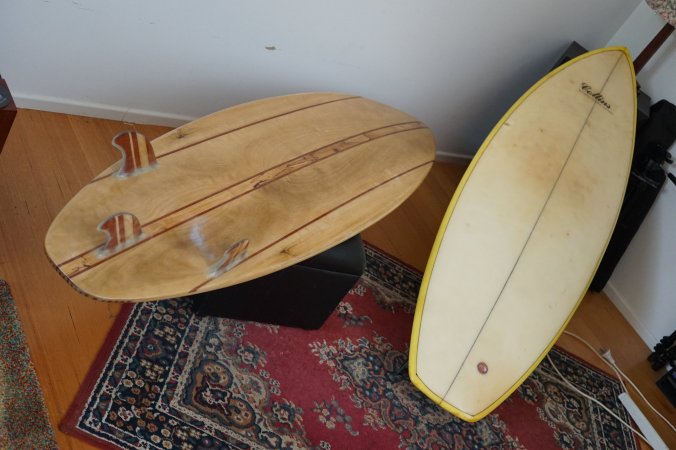 A token plastic one on the right

Friday, our last day in Australia arrived and we said a farewell to Colin (Maureen gave us a a lift to the airport so she had her own goodbye) we were really very sorry to be leaving, it has been fabulous stopping in Conjola Park with them both. Eventually we were off.

On the way to Sydney Maureen gave us a little tour of her childhood haunts, there are just so many nice places along this coast, it is more built up and increasingly heavier traffic the closer you get to Sydney.

A view to Point Perpendicular, I’ll leave you to ponder the relevance of it’s name 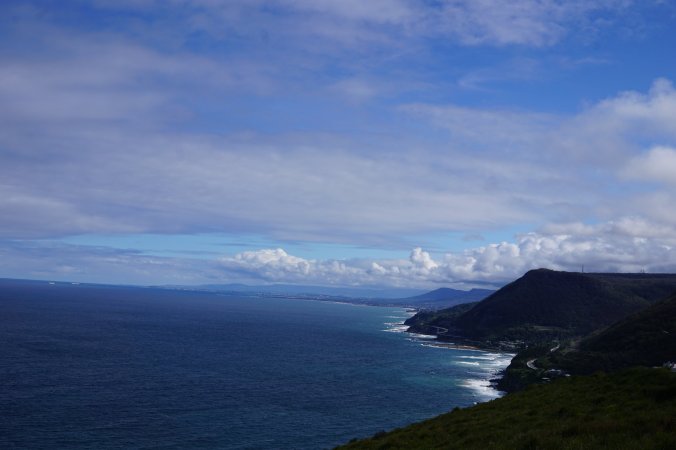 Then it was farewell Maureen, thank you for your kindness and generosity you showed throughout our stay.

Once in the airport we had to wait until 6.45 pm before the check in started for the 9.45 pm flight to Kuala Lumpur, once again at the check in they did not like a bagged bicycle, we had to show them their own web site explaining how to package your bicycle before they would issue our boarding passes.

Our worldly belongings ready to go from Sydney Airport

Once this hurdle was jumped (finger crossed for decent baggage handlers!) Janet tried to sabotage going through security by leaving her penknife in the pocket of the tent inside my bag, of course this was found after a lot of tooing, frowing and pointing. It does mean we are a penknife out of pocket now though.

We boarded the Airbus A330 no problems, but our airline Airasia are right at the budget end of the market so you do not get anything unless you pay (even water), the meal we booked was one of those single foil trays dropped onto our fold down table and it was very poor.

The flight seemed to take 15 hours where it really took 8 hours to get to Kuala Lumpur Airport, from here we transferred (no rush we had 4 hours here) to another A330 for the final 7 hours to Seoul. Again Airasia charge for everything and the finished off with another poor meal.

On this flight we completed the immigration and custom forms (one for each), you need your accommodation details along with stay duration information plus make sure you fill in a customs form each unless you are “family”.

At 3.20 pm on 13th October we landed at Seoul-incheon airport.