A very early start to leave Conjola Park before 6.00 am for an early (ish) start from Ulladulla boat ramp

Looking back to Ulladulla harbour

Once the trailer is reversed down the ramp into the water, the boat’s buoyancy lifts it clear of the trailer then you pull it further down the floating pontoon while the car and trailer are parked out of the way.

All three of us jumped into the boat and made our way out of the harbour at a steady 4 knots, the speed limit here. Once clear the 75 hp Mercury motor (two stroke) had us whizzing along. In reality it probably is not that fast but in a small boat it seems quicker than it actually is.

Moving north we stopped opposite Narrawallee Beach in around 40 metres of water, baited our hooks and dropped down to the seabed. It is a sandy bottom here and the target fish is the Flathead, named due to it’s well …. flathead. To keep these fish they need to be 33 cm minimum nose to tail.

Who will catch something first?

It didn’t take long before we were catching, a few too small to keep were returned alive but quite a few reasonable fish which were keepers. You have a limit of 10 fish each for the day. 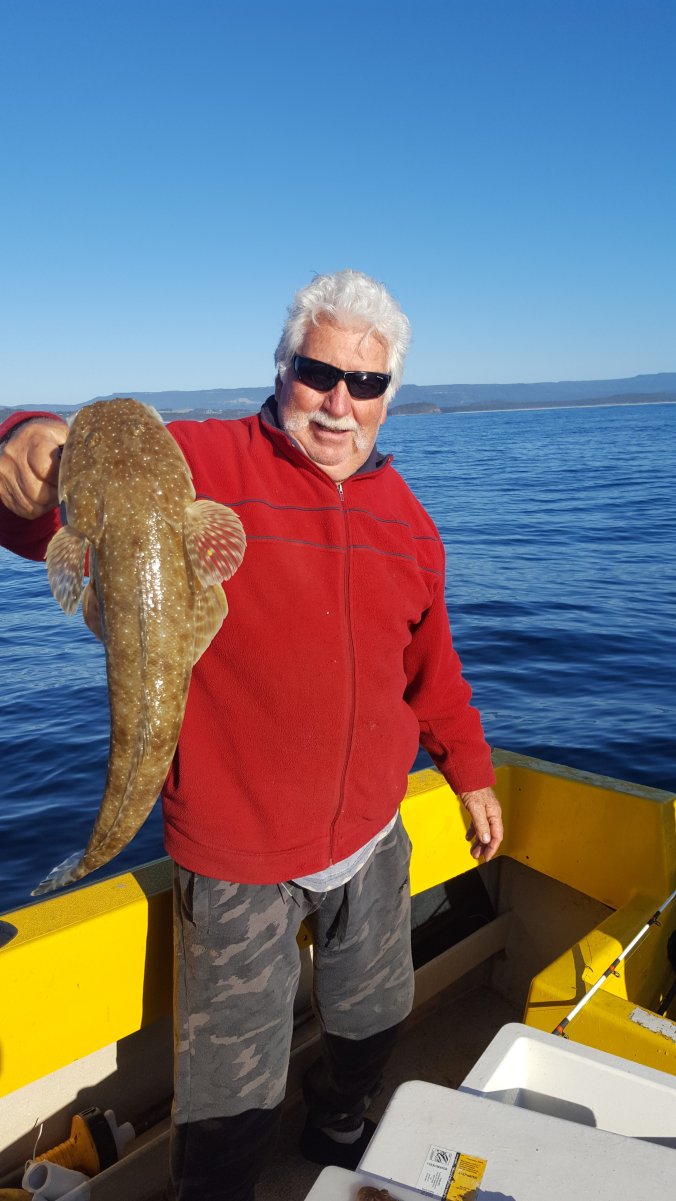 Other things spotted out here were a large sealion which ate some of the bait! A very large pod of common dolphins came past very quickly, obviously on a mission to go somewhere as none of them water to play.

There were plenty of jellyfish floating by including the Blue Bottle which even though tiny packs a mighty sting, we took Colin at his word as Janet could not be convinced to pick one up!

As the wind strength increased fishing on the bottom became increasingly difficult but by 10.30 am we had our 20 fish and called it a day, making our way back into the harbour.

Getting the boat out was the reverse of getting in then it was just the short drive back. First thing was washing the boat down and flushing the engine through with fresh water (the outboards are water cooled and use sea water to do this).

Filleting table which looks very similar to an ironing board!

Cleaning the fish took a while but gave us three very well stacked plates of fillets. It was lunch time then so time to sample some fish, just lightly breadcrumbed then fried, and it was lovely one of the nicest fish we have tasted in a long time. Thumbs up to flatheads.

Our harvest of fillets

Our evening meal consisted of guess what? Flathead.