Everything was dry, the winds Northerly and the sky clear, a perfect start (yes we were going south).

First across the Murray on the free ferry then turn South and cycle! 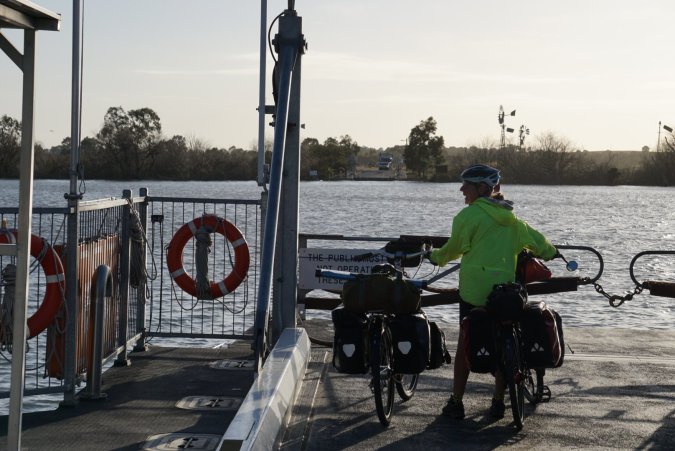 The first stopping point was Meningie on the shore of Lake Albert, this was 45 km away and generally flat. Cycling along a fairly quiet road with an OK shoulder was nice as we passed the usual mixture of farmland each side.

Looking out across the Coorong

We made excellent time passing Pink Lake just before Meningie, at the moment not very pink though.

Cycling into the town we stopped for our lunch break and to pick up some water as tonight’s campground is a national park one which has no water.

The metropolis that is Meningie

Feeling rather portly with all the water we continued on enjoying the extra push the wind was giving us. The next point of note was the first possible campground, Parnka Point here there was actually a very pink lake, we passed on this and continued on.

Policeman Point was the next place we passed, this has a hotel and nothing else. Leaving this Janet suffered another puncture, the damaged part of the tyre had let in something it shouldn’t have, I think it is time to retire the tyre.

Off again and the final stopping point was Salt Creek, this has a roadhouse which is now closed for 2 months due to the owners dispute with the National Park Service and Local Council. As we were there the owner happened to be passing so stopped and said we could still camp there and he opened the shower for us, very kind of him.

So at a total of 105 kms we stopped set up the tent, when the local cat turned up and generally annoyed us, getting in to everything the way cats do. Then we were horrified as it used its claws to climb the tent managing to puncture it in several places, we were mortified. So the next job was to repair the best that we could using the stormsure patches I have.

We ate a very nice (well OK) pasta meal then watched a terrific sunset to the sound of what I am sure must be a million frogs the noise is quite incredible. 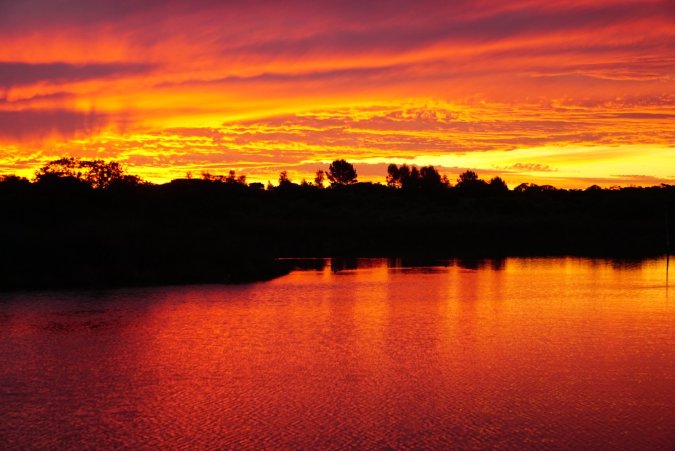