Up and out nice and early today as the wind is getting up to 50+ km/h after lunch. Leaving the campground through a gate straight on to the Encounter Bikeway, this is mostly quiet road and dedicated track starting in Victor Harbour and finishing in Goolwa which is exactly where we want to go.

First we passed the walkway to Granite Island, info link here on a normal day you can catch a ride over there on a horse drawn carriage.

And go down here on to Granite Island

Continuing on we passed lovely beaches quickly arriving at the next township along, Port Elliot and on again to Middleton, a surfing town with huge waves crashing onto it’s sandy beach. 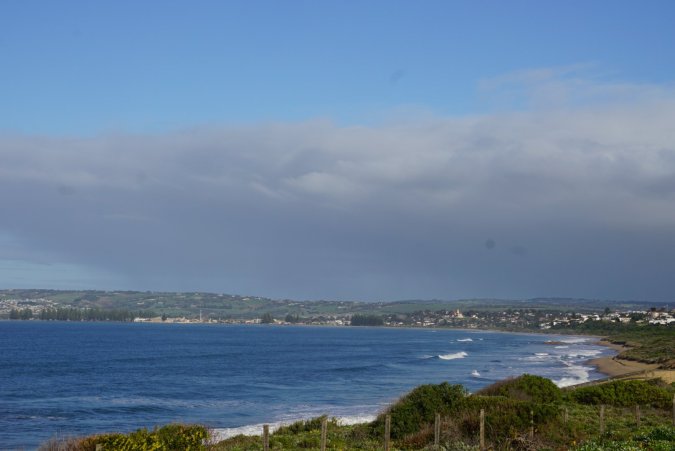 Looking back towards Victor Harbour

Only a short section to Goolwa to go and we were caught in a rain shower, despite an attempt to shelter we got rather damp. Then it was into town along the banks of the Lower Murray River, a haven for wildlife (and rich holiday home owners!) Goolwa info here

Who could resist another bird photograph

The Murray River and the bridge over to Hindmarsh Island

We passed Goolwa train station where in the summer a steam train runs to Victor Harbour, it seems to be set up like the Severn Valley Railway Train info here

It was along the main street up to the campground, with the impending wind we pitched in a reasonably sheltered spot, went shopping, did the usual cooking and eating while watching (from the comfort of the camp kitchen / lounge) the trees bend further and further as the wind strengthened.

Only a short bout of TV watching remained (the Australian version of Pointless is a very poor version of ours!)