We had intended a day doing nothing but over breakfast Joslyn stopping in the room opposite offered us seats with her as she was off to see some of the sights Kangaroo Island has to offer which of course we accepted.

First it was a drive to the South West corner of the island, kangaroo Island is deceptively large it was 150 kms away. Here you enter the Flinders National Park for $11 each. 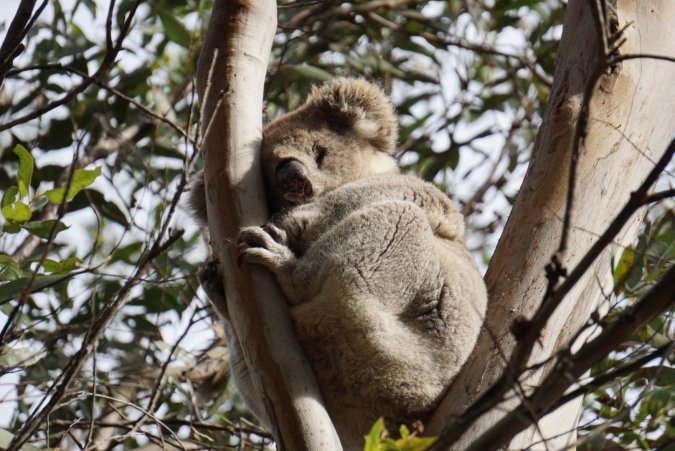 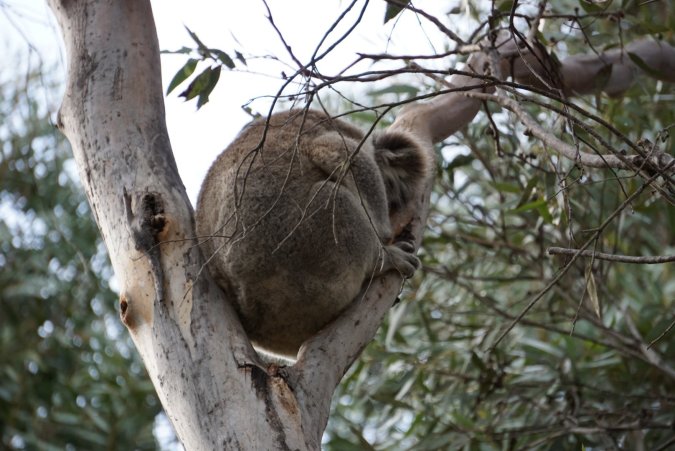 Wedged in so tight 100km/h winds cannot move me

Right next to the car in a fiercely swaying tree was a Koala wedged between branches fast asleep. On the way Dow the road from the Visitor Centre we passed some Cape Barren Geese and their young chicks, all say ahhh (no not is a dentist open wide fashion). Geese facts

Koala facts 23 were introduced in the 1920’s there are now 50000 here, they have harmed the eucalyptus tree population so around 10000 have been steralised (with the remaining 40000 being pasturised) to try and control them! koala facts

Not too far on was Remarkable Rocks which are well ….. remarkable granite rocks, due to the high winds (100+ km/h) we could not get right up to them but they were impressive.

Just across from he rocks was a 1909 lighthouse, a short video clip shows you something of the strength of winds now. 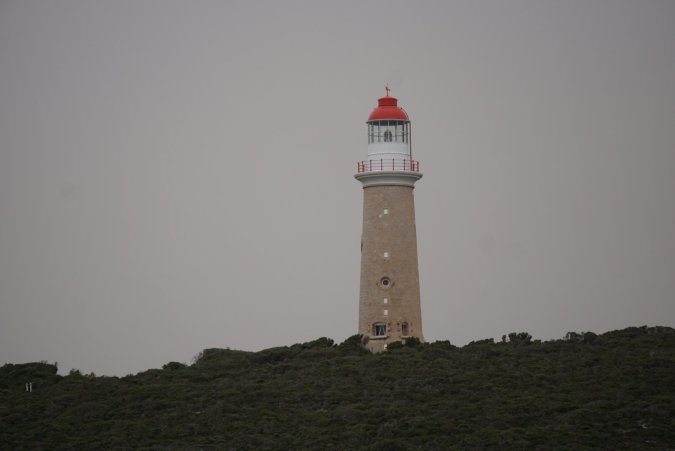 A lighthouse he says stating the obvious

From here it was on to Admirals Arch, again part closed due to the winds so we could not see through the arch itself. There were a few Fur Seals down on the rocks though. 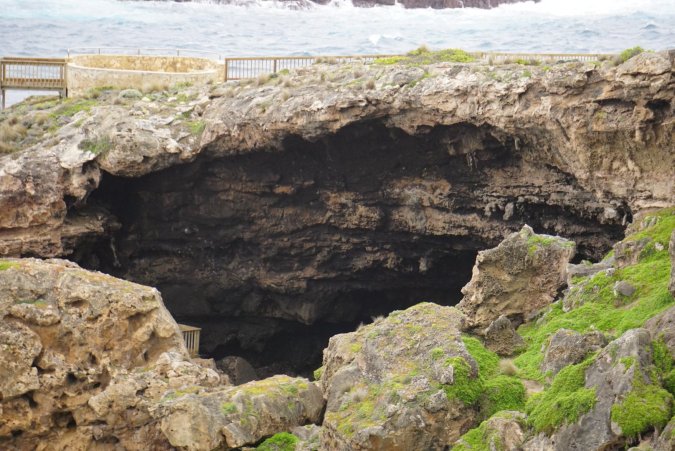 Normally you can get right down to Admirals Arch, not today

Hanson Bay followed next, this on a nice warm day would be beautiful, as it was we will call it lovely instead. Here we had a coffee and a cake then found out all ferries had been cancelled today due to high winds.

A super relaxed Kangaroo sheltering from the wind

The Platypus walk was next, the Rocky River has around 200 wild Duck Billed Platypus, we didn’t see one though but we are sure that the ring of bubbles rising was caused by one!

This is as close as we got to the real thing

Vivonne was next to fall to our mighty visiting skills, similar to Hansen Bay, lovely.

Seal Bay only received a cursory visit, at $16 it is too expensive to go visit sealions.

Lastly before returning “home” to Kangaroo Island Backpackers was a detour to American River, a very small township this would be a nice place to stay.

On our return the Backpackers had gone from 3 people to a full 22 people due to the cancelled ferry meaning people needed somewhere to stay. We booked another night ourselves as Joslyn has offered another day touring with her tomorrow, and the weather is still likely to be very poor so there is no point in cycling at the moment.

As this is being written it is still raining heavily as it has been for the last 7 hours constantly, I gave a feeling the tracks we were due to ride on will be very muddy / soggy for a while.