Everything was very damp again this morning after a very still night so we delayed a little and left around 9.00 am with the tent feeling only a little dryer.

The sun was up and it was a perfect cycling day, either no wind or a very gentle breeze behind us. The 8 km backtrack to the Flinders Highway from Venus Bay passed quickly then once again a very quiet cycle along the highway.

The road was more up and down today, never too much up though! As we continued South East the countryside changed to very open farmland, often flocks of grazing sheep raised their heads and were so shocked to see cyclists they ran off. 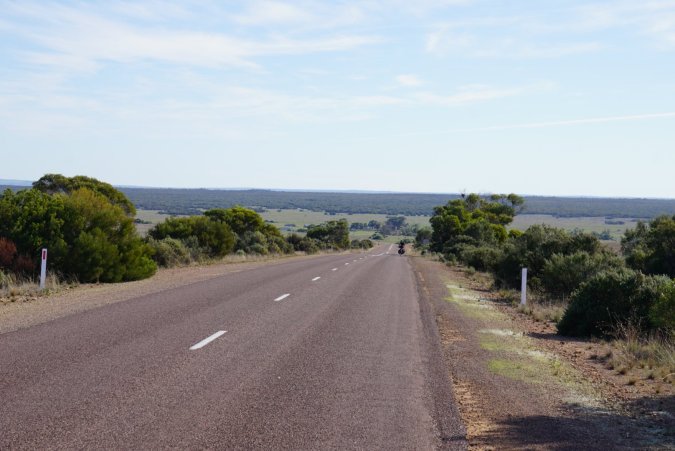 The sea dropped into and out of sight as we went along, always looking beautiful though.

Farmland, dunes and the sea

At 63 km we arrived in Elliston, the town sits on Waterloo Bay. It has two caravan parks, the first opposite the jetty is about 1.5 km away from the main street, the other, where we stopped, is right next to the grocery store, the bakery, the pharmacy and the pub (there is not very much else in the town really). The pub is also the bottle shop (or off licence for all you poms).

We paid $27 for a night, showers are good, camp kitchen is good and the tent was pitched on grass for a change.

After a shower and a shop we walked along the beach to the jetty (you can only do this at low tide) and had a little fish for an hour or so. Managing to catch a wrass and a rock cod, both of which were returned.

From the jetty across Waterloo Bay to Elliston

Not sure what this is but it went back 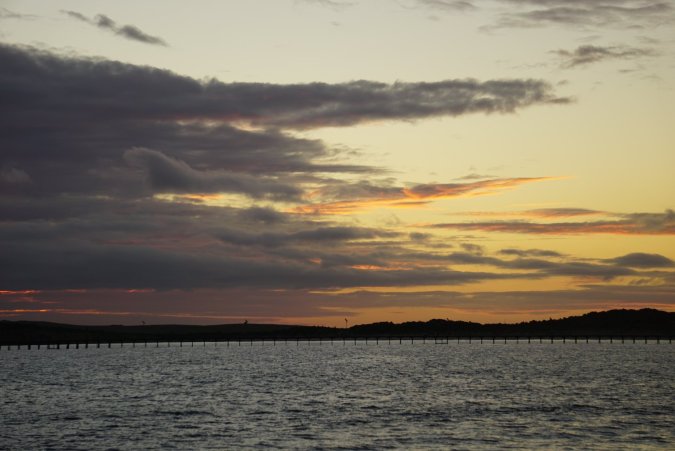 A view of the jetty as the sun sets

Our meal tonight was a starter of garfish fried in butter and lemon, followed by a sausage curry (thank you Pat) and rice (thank you Uncle Bens). We sat up a while in the kitchen, nobody else was around though, all shut up inside their caravans. Eventually retiring to eat some comforting biscuits while wrapped up in a sleeping bag feeling nice and toasty.