Did the usual stuff, woke up, got up, packed up, porridged up, teaed up (coincidentally when a town name ends in up it has to do with it being a source of water).

We said a goodbye to Bev and Dorothy, tapping our shoes together we were off.

It was on to Highway 1 or the South Coast Road to give it it’s full name. As it is a Sunday there was a 2 hour window before the caravans were packed up and on the road where we had it all to ourselves. Very nice cycling indeed.

The road goes ever on

Even after the 2 hours to say it was busy would be a huge understatement, there was still hardly any traffic.

The big bonus for today was the wind had shifted and was blowing on our left hand side better still slightly being us. Consequently we galloped along.

Our goal today was the Old Fitzwilliam School, around 60 km away. The site is where a town used to stand, the school was opened in 1966 and closed in 1995 as it served first a thriving community (at one time the school had 47 pupils) the a community in decline. There is the remains of tennis courts and a cricket oval (it is Australia remember).

The road continued to be our friend, nice steady ups and downs and with our wind assistance we arrived at 12.30 pm.

Typical road at the moment

Whilst coming down a hill there was a large flock (maybe 10) of Emus, this is the closest we have come to them in the wild and what a magnificent bird they are.

At the camping area we picked a nice spot under some trees and set up, enjoying some hot tea and coffee. There seemed, no there was actually an awful lot of flies around, most irritating they were too. We retired to our fly proof tent until 4.00 pm which you may not be aware of is a fly’s bedtime. So we cooked food fly free. 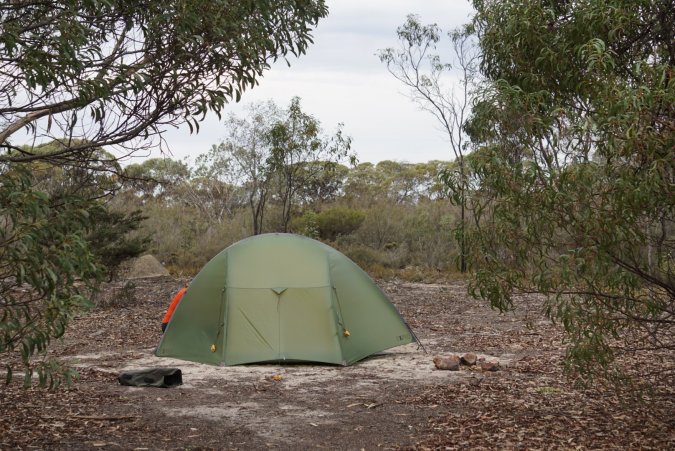 During the afternoon some more people arrived making 4 groups camping here, well just us camping, the rest in caravans or their cars. There are no facilities here at all, no water or no toilets, but it is free.

All that is left

And if today was not exciting enough it is Mothers Day here in Australia, so have a nice day all of you.

To finish the day the sun became a red firey disc, then just vanished behind some cloud. Then there was only darkness and not a star in the sky.

Sun it go away