Tuesday saw a final organised panic of packing everything in boxes and throwing them (quite literally) into the garage. We had the morning to finally sort out the house which we have let out. A little later Emily and Laura (at last! What have they been doing all mornings?) arrive to help. 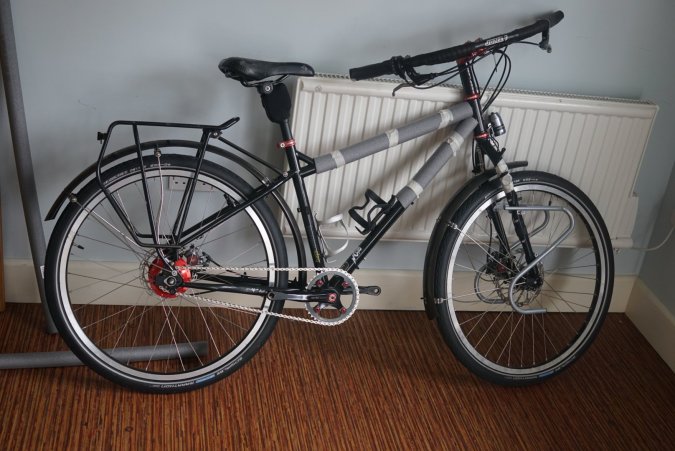 One bike ready to go

We now have a very clean (unusually so) and tidy (even more unusually) house ready for Claire, Mark and family.

Several repacks and weighings later we managed to get our luggage weights exactly. This means the 30 kg total luggage we both have is made up of 18 kg per bike and 12 kg luggage to check (this is all we have for 12 months! Just one pair of underpants it is then, did you know you can turn a pair inside out and it is just like having a clean pair!). We are also allowed 7 kg of carry on luggage to help out with maybe another pair of pants (yes I do have heavy pants).

Finally all packed and around 12.00 we were off and 30 mins later we were back again as Janet had forgot her phone.

Heathrow is easy to get to and without any hold ups we arrived there at around 3.00 pm. We fly out and 9.30 pm and check in is 3 hours earlier. At the airport we put the bikes into their plastic bags, this time forgoing the normal bike box. The idea being if the baggage handlers know that it is a bike they take more care of it, rather than a box which they stack 600 suitcases on top of crushing it to a nice wafer thin minty bike. We shall see. 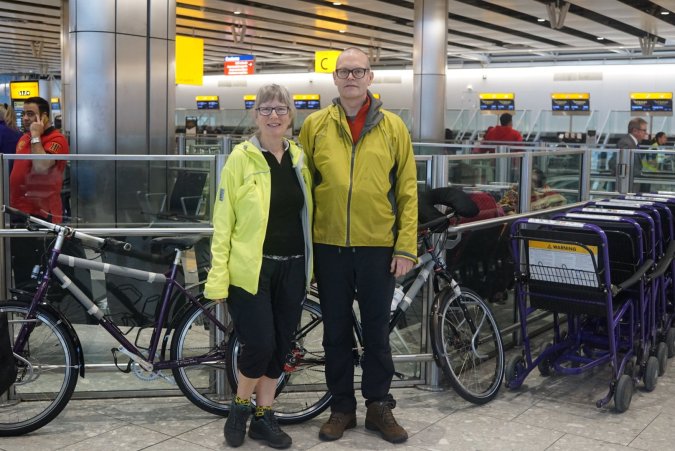 The check in proved a very protracted event, they did not want to take a bike in a bag eventually the supervisor sorted it all out and we were all check in without any excess baggage charges (the lady in front was 2 kg over and had to pay £78 for it!). We did however have to sign an indemnity form confirming any damage was our fault! We did get our hand luggage weighed as well, the first time we have ever had this done, a good job we were exact with our allowances.

Bikes checked in waiting to board

Malaysian Airlines proved to be excellent, taking off exactly on time, the 12 hour flight to Kuala Lumpur is actually very long but in reality felt even longer, a complete fail on the sleeping front. We landed in Malaysia on time to 33 degree heat, very nice. The next stage of the journey was delayed a little but we were soon on the 5 hour journey to Perth. I can confirm a 737 is very small and cosy compared to the A380 our first plane.

Landing at 1.30 am on time in a 21 degree Perth, once we had sailed gracefully through customs (me) or fallen at every hurdle (Janet), we eventually collected our bags and bikes, Janet’s was unscathed mine however had a very bent bottle cage and the plastic bit on the brake called adjuster was missing. In the arrival area of Perth airport we assembled both bikes and threw the luggage at them until it all fitted.

By 4.00 am we were ready to ride out on our first adventure, it was a short 10km (or 6 miles for any non metric individuals out there). We cycled along lovely tracks to Connie and Noel’s beautiful house in the Bayswater area of Perth.

By 5.00 am we knocked on their door and there were their to welcome us with a smile and most importantly a cup of tea. The onset of very heavy eyelids cut short our chat and we left to grab some zzzzzz as Connie and Noel got ready for work. We retired to sleep for a while.

At 2.00 pm we awoke and took some time to sort out our bags, check the bikes over thoroughly and make more tea. By 4.00 pm Connie was back and prepared a lovely evening meal with a glass of wine. Janet took their dogs Rosie and Paris out for a walk, managing to not get lost along the way.

Careful packing of our things

We sat talking and watching some of the Commonwealth Games, there was a strange TV bias towards the Australian atheletes though. We said an early goodnight as we are still suffering from flight time and time differences.