It is Sunday our last full day in San Francisco, booooo. But it is cable car day today, we stopped in until just after lunch. Our lunch was vanilla ice cream and really ripe persimmons, all part of our healthy diet and lifestyle plan.

We walked down to Van Ness and California past the Symphony Hall, the Opera House and City Hall all huge imposing buildings. From here one of the three cable car routes starts, we jumped on the car only to find that it was not the $5.00 web site price, not even the $6.00 which was adverised on the huge poster on the wall next to the stop but $7.00. Guess what? we were 65 cents short, after a lot of chuntering the operator just charged us for one. 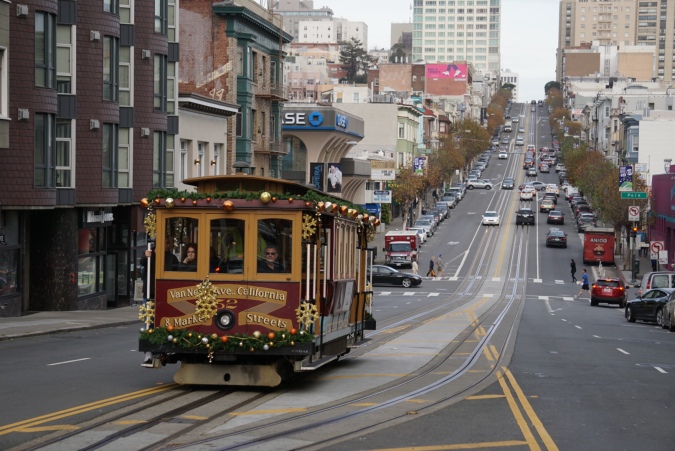 The cable cars have a cable (amazingly!) running below them which the driver operates a mechanism to grip it tightly to propel the car forward, the braking is done using wooden blocks onto the rails, which is impressive if you have seen how steep the hills are. 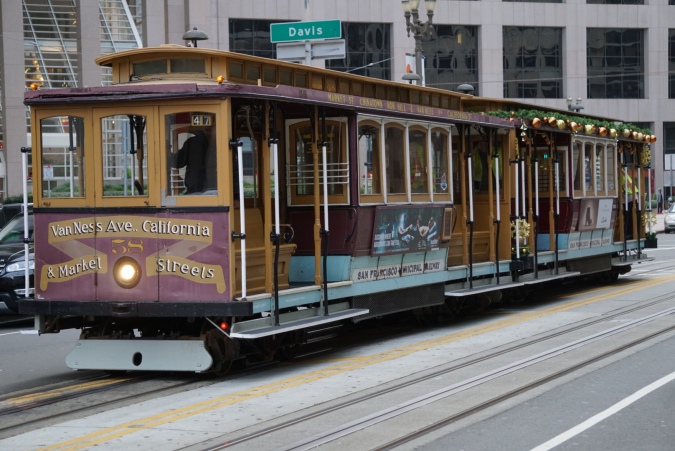 The cable car stops at the ferry building where we got off to check where we need to get to for our crossing to tne train station early tomorrow.

After our failed attempt to visit the Little Sheep Mongolian Hot Pot Resturant yesterday we were determined to eat there today. Arriving 10 minutes before it even opened, and there were already around 20 people in front of us, we did get a table though. We chose the half hot and half original sauce into which you place your raw ingredients to cook. We ordered lamb (thinly shaved), meatballs (small but perfectly formed), noodles (noodle like) and vegetables (leaf like). The meal was lovely and if you every get the chance visit this resturant. And oh you have to use chopsticks, those noodles are very slippery customers. 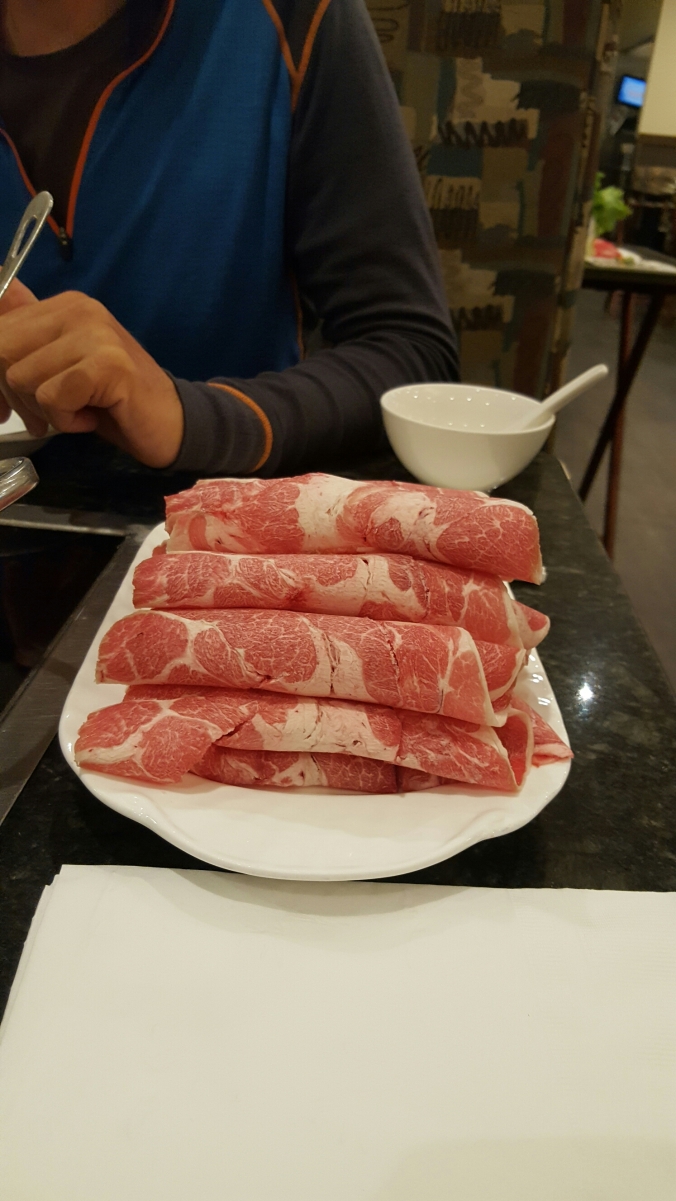 Back at Tim’s apartment (after the usual journey) we were called by Tim to go out for pool and beer. So out we went playing pool and drinking beer, emerging victorious (I was surprised to find someone worse than us!).

No wonder we play so badly without a head

A stop for cookies on the way back (you could also pick up some new underware at the shop as well if you needed to), we chatted for a while then all of a sudden it was past midnight and time for sleeping.

It was monday, up early to catch the train (5.00 am). Today it is Planes, Trains and Automobiles  or Ferries, Trains and Bicycles (not quite as catchy).

We said a sad farewell to Tim, he has been so generous to us and we are sorry to leave. While we we loading the bikes Robin turned up and a second farewell took place. Then it was down through Castro for the last time (cue a tear in our eye!), along Market Street all the way to the ferry building, Robin passing us in her car waving a third farewell.

Cycling so fast I am only a blur 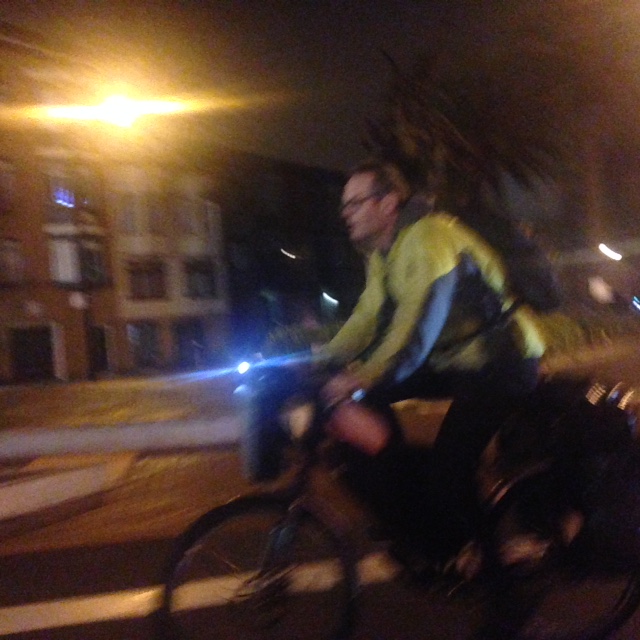 While wating to board the 6.25 am ferry to Jack London Square (Jack London sounds like the stage name of a very english wrestler) Robin turned up as waved farewell one more time, we will miss her lots.

30 minutes later we docked and a short cycle to the Jack London Amtrak Station (and not a single wrestler in sight) where we waited for the train. When it arrived it was huge (as in long) but also a double decker. Our bicycles were checked baggage at the end of the train and our seats were reserved at the front of the train (sigh!) so a lot of walking later we were sitting very comfortably in what would be a buisness class seat in the UK ready to go.

Aboard the train we whiled away 6 hours, the train is very slow. Until our approach to San Luis Obispo where the train slowed even more as it negotiated some very sharp bends including “the horseshoe” a very long tight bend where you double back on yourself.

Cornering on a train

Once off our train we rode 2 block to Tom and Nancy’s where we are stopping for 2 days. A lovely warm welcome (do you want a beer? is always nice to hear) then a shower and we were all settled. We were invited for tea along with their friend Kerry (her husband David another keen cyclist could not make it), we ate Asparagus, Salad and a lovely homemade Macaroni Cheese followed by Persimmon Cookies, also wine and grappa to drink. The persimmons were from Tom and Nancy’s own tree. Some good conversation which inevitably turned to Trump. When the words Donald Trump are mentioned a dark cloud of despair appears over most californian’s heads (for the non-US readers, Trump = Republican and right wing, California State = Democrat and liberal). Then the day was gone and sleep beckoned. 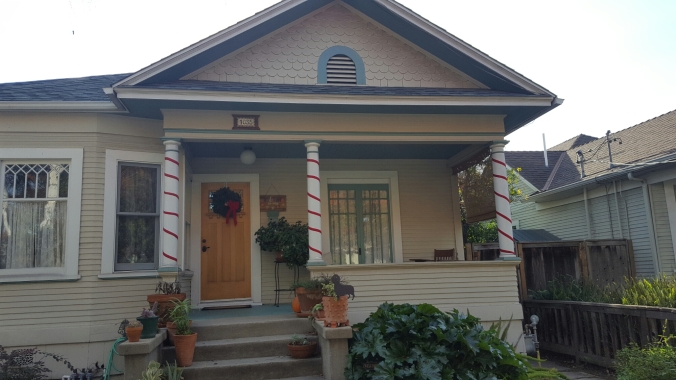