Today we woke to a tent that was absolutely saturated inside and out with condensation from the mist that had rolled in overnight. In fact the whole site was shrouded in a blanket of it.

By the time we had packed up and ready to start the sun was well up, or at least we think it was, you just could not tell, the sun’s warmth was not impacting on this mist.

We would be cycling along highway 1 all day (just for a change!). Around 18 miles of it gently undulating, the rest very hilly but we are expecting only a gentle headwind. This mist did not want to go and visibility was very poor.

A turkey vulture stalks Janet waiting for her to stop

As we needed some food for tonight a stop at the local mini market was called for, unfortunately we left empty handed, all it had was the usual sweets and chocolates and very little else. Perhaps the next one will be better, nope, and 2 more attempts later we admitted defeat and just brought junk stuff for tea later on, but this is getting ahead of ourselves.

At 10 miles we passed a zebra, no a real live and grazing one and across the road even better, a beach full of Elephant Seals, it is mating season right now so the males are all fighting for dominance and making these very loud snorting noises (very similar in fact to Janet’s snoring!). It is a truly impressive sight. 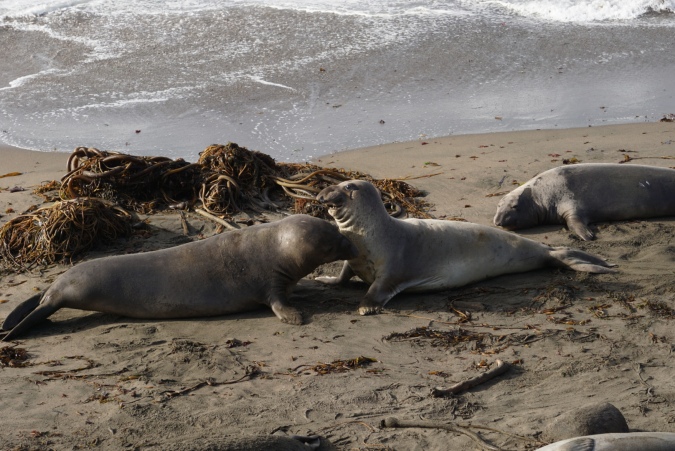 The mist stuck with us for the 18 miles to where the hills really started, we ended up climbing 2500 ft todday through what was called majestic coastline and cliffs, just a pity we could not see them.
Raggety Inn was a nice coffee stopping and general taking a break point, again it apparently has some lovely sea views. 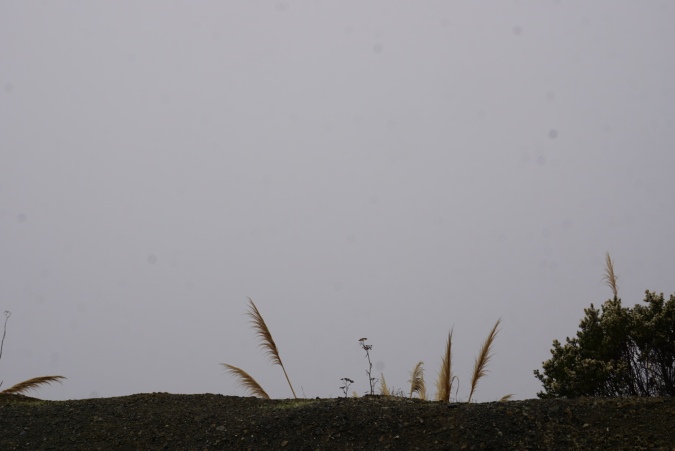 The mist did lift for just a short section affording us lovely views before returning very quickly. A german couple, Ralph and Imke from last nights camp passed us, we will see them later at Plaskett Campground.

Several cyclists also passed us in the opposite direction, they told us the state site in Big Sur is closed due to forest fires.
Eventually we arrived at the campground and pitched our tent, in common with all the state run sites there is only water from a stand pipe due to the drought here. Everything felt damp and sticky from all the salt laden moisture in the air.

Total milage for the day 36, the riding was lovely even though much of the scenery was hidden from us all day. By 5.00 pm it was dark and we were settled in our tent looking forward to a good nights rest.