We were ready and out by 7.00 am, and the first time on the trip we used our cycle lights. The roads were just starting to get busy as we made our way back to the centre of town and picked up the Mexico 3 road to Ensenada. A very short drop down to the railway and dry river then it was up up up all the way and very steep as well. 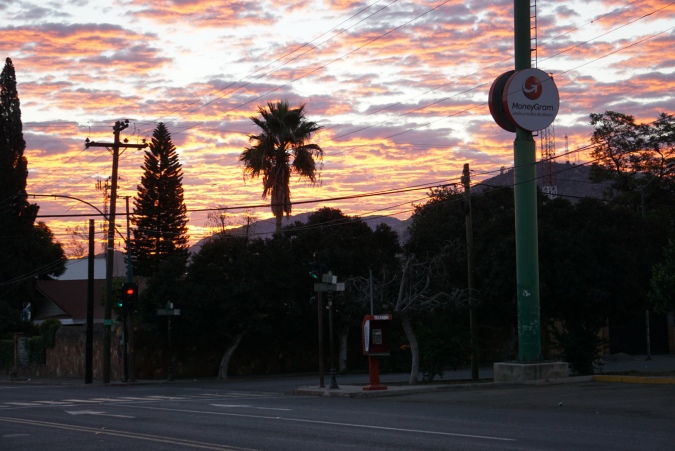 Immediately we noticed that unlike the USA there are actual real buses here, you could get around easily without having to use a car.

We went straight across Mexico 2 and out of Tecate, the road was now a normal single lane carriageway but it does have a very wide shoulder. However unlike the USA the cars and lorries use this when they are being oovertake or are going slowly (like us!).

That is a nice shoulder you have there madame

The climb continued for a few miles and passed through smaller villages. There was a cloud of dust hanging over all of the villages, all of the side roads are dirt and with the high traffic levels the cars kick up great clouds into the air as they pass.

There are plenty of places to stop and buy food or water as well as dozens of roadside tacho sellers and pottery sellers, everyone waves as we go past (or tries to flag us down to buy something). 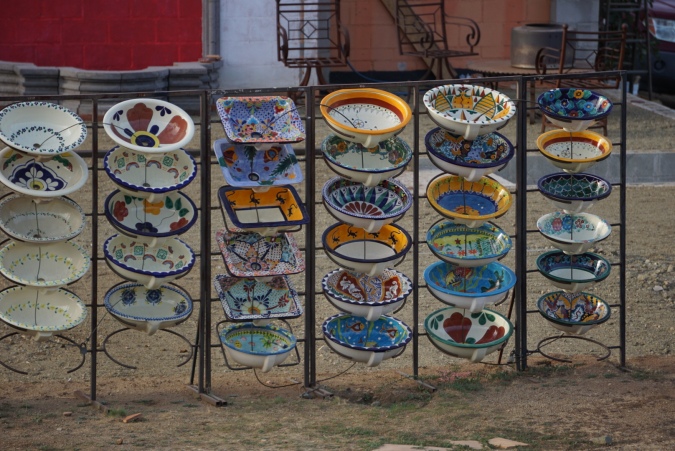 A lot of pottery sellers along the way

The first descent was long and fast, very nice. The scenery is lovely and very rural now. Then it started, the main climb of the day, but the big bonus was the much cooler temperatures, 7 or 8 degrees lower today. Another long fast descent followed (or long steady descent for Janet), and we actually felt chilly coming down!

The next section was on a lovely newly surfaced road, and yes it did start uphill, but the new road soon stopped and we hit roadworks. Here the traffic was diverted onto a track (it reminded us of the Great Divide!), then on to the old road which eventually opened out to a better road with a nice shoulder again.

Here we entered the major wine producing area for Mexico, everywhere there were vinyards. The undulating road continued past vinyard after vinyard, all of them have a tasting room and resturant attached (it was very difficult to get Janet past these!)

Then we were into the last miles with the sea suddenly appearing, and the shoulder suddenly disappearing but generally the drivers gave us plenty of room. Even better we were then hit by a sea breeze and the temperature dropped to a very comfortable 20°C.

First view of the sea

Turning left onto Mexico 1 towards Ensenada our shoulder returned, the town (city really) was huge and vibrant. We headed for the harbour and called Jose our warm showers host, he was in so the 2 -3 mile zig zag route to his house started. Much to Janet’s delight there was some very steep climbs (pushing for the first time in quite a while), a car pulled up a relative of Jose and took the bags making the final cycle a lot easier.
The house commanded a lovely view right across the town and bay, our room directly overlooking it. We were greeted and treated like family, eating a very nice chinese meal with Antonio and Mara and chatting (a lot of the time through google translate! which has made me determined to learn spanish before our next trip).

Feeling very full and content we retired for the night, pausing to admire the view across Ensenada just as pretty at night.

The view at night

One thought on “Day 96 A long road to Ensenada”