Another project for Simon

It was a steady climb to begin, lasting around 5 miles and gaining 1200 ft. After a short down we entered Boulevard, passing the renouned Wisteria Sweet Shop where they hand make traditional candy and send it all over the USA, unfortunately it was closed so as candyless cyclists we carried on.

Just after Boulevard we set off down Highway 94, this departs from the Southern Tier cycle route and heads down towards the border. After another climb we made a long descent, it is a lovely road with fantastic scenery. The quality of shoulder varies but the traffic was very light. 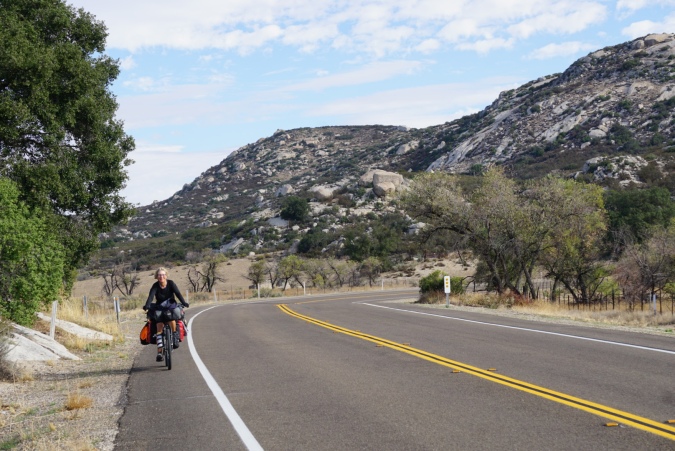 As we neared Campo the road closed and a detour sign was out, you need to be careful in the USA a detour could be any length (but usually huge!). There was a Sheriff’s patrol car parked up and he confirmed it was very short. Following it we came back out on the main route at the Green Store and yes it was green. We had some lunch here.

Some ups and downs later we came into Potrero, who was sitting there in his car but the same officer we had spoken to at the detour. He told us to take care on the road, take care in Mexico, take care with the water etc etc. Many americans have a very negative view of Mexicans and Mexico.

Our first view of Tecate

A short cycle and we arrived at the border, we pushed our bikes through the pedestrian side and we were waved past the x-ray scanner and we were in Mexico. A slight problem we did not have a tourist visa! so we pushed our bikes back through and around again (nobody questioned this). After tracking down immigration we did get a 7 day visa (which is free, longer stay ones you pay for). At last we were in Mexico. 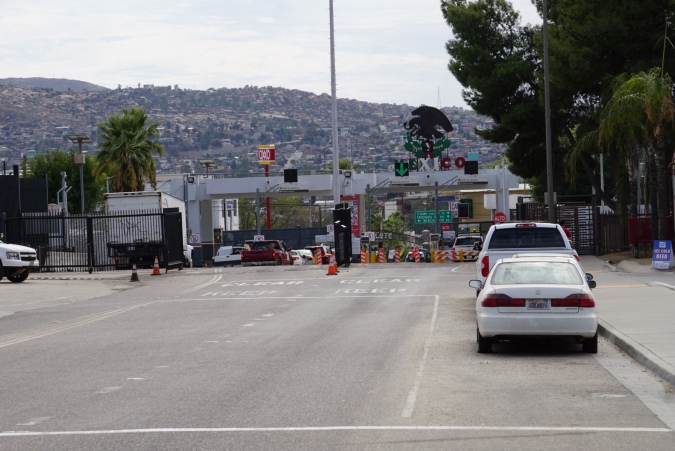 The pedestrian route through (no queues)

I had found the location of a basic hotel and we made our way there, with the help of a pet shop owner who we asked for directions, motel El Dorado. For $700 (about £30) we got a room, basic but clean.
We could easily walk to the shops, the bank and restaurants. We asked the pet shop owner where to eat, he suggested a tacho shop opposite. Two tochas (beef sandwiches) later our hunger vanished, they were lovely. A visit to the grocery store, which was very impressive, prices were not hugely expensive like the USA and they had a better selection.

So welcome Mexico and goodnight.