We wanted an earlier start today, but we were thwarted by no water. In Valle all the water is shipped in via large containers and someone had forgotten to order / deliver yesterday, no water until later today for the whole campground. We did manage to get the campgtound store to let us have 4 litres so we could at least get on our way,  but of course no toilets worked.

Yabadabadoo said the sign as we left, todays cycle is a steady uphill but nothing steep, so steady as she goes (who she is I am not very sure though).

We made good time, again a nice shoulder to cycle down. There is a time lapse movie of the first 13 miles HERE. As we gained height the reverse of yesterday happened, the scrubland changed into forest.

At 20 miles we reached Red Lake, a convenient place for a coffee break. Leading up to this on our left visibility was very poor, there was a forest fire over to the east. We were entering the Kaibab National Forest again.

The final 10 miles inyo Williams, under the I40 and down into town, around 4000 people live here. Edtablished in 1881 (a palindromic number, look it up if you are not sure).

First stop the post office to collect Janet’s new Exped mat. It was waiting for us in all its glory  (well a brown cadboard box). Again I cannot recommend Exped enough,  service second to none.

Then we found our motel, The Grand, it  is the oldest in town and is currently under going refurbishment. Our room is lovely and the owner could not be more helpful, again it you are looking to stop in Williams then this is the place for you.

A walk into town, a visit to the grocery store and a meal at Route 66 Diner, it was OK but nothing to write home about (see how easy it is to lie, here I am writing home about it). The Williams Marching Band came down the main street (must be celebrating our visit!).

The whole town of Williams exists for two things, the tourist Route 66, the 1950’s with plenty of tearful nostalgia about the good old days and the Grand Canyon Train, where for $100 you get to go to the south rim station, you can pay triple this for better seats (next to the driver!). 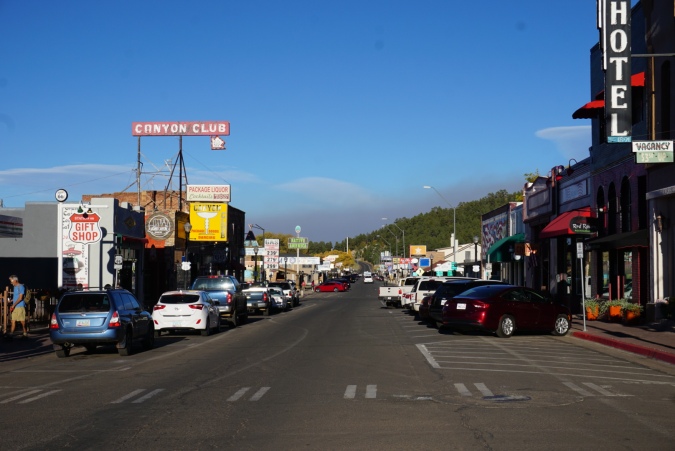 We did wander into a Harley Davidson shop, where we were talked at by a very angry owner, not at us but the political class. This seems to be normal (maybe not the armed revolution he was on about though) for many americans, fed up with complacent governments not doing anything for Joe (?) average.

Then the day was all gone.