There was no rush to get ready today, the temperature dropped very quickly last night everything was well frosted. We moved the tent into the early morning sun to help dry it off a little while we packed up our things.

It was 10.00 am before we got going! straight on to the interstate and five and a half miles of steady uphill to get to 6100 ft. As usual the views just kept getting better and better although most of the pictures are of Janet toiling up one hill or amother.

Then it was a lovely descent down into Kanab, the type of scenery has changed again, it is back to big skies again and oh yes sand, very red sand which manages to get everywhere.

We pased a nice sandstone totem,  there are several areas which are indian lands (and have different rules and regulations to the state). There was also a museum we passed and saw a dinosaur footprint.

It was into Kanab then, initailly I though it was a town of motels, but eventually a cafe loomed into view, a couple of coffees and croissants later we felt ready for the final 7.5 miles for today. 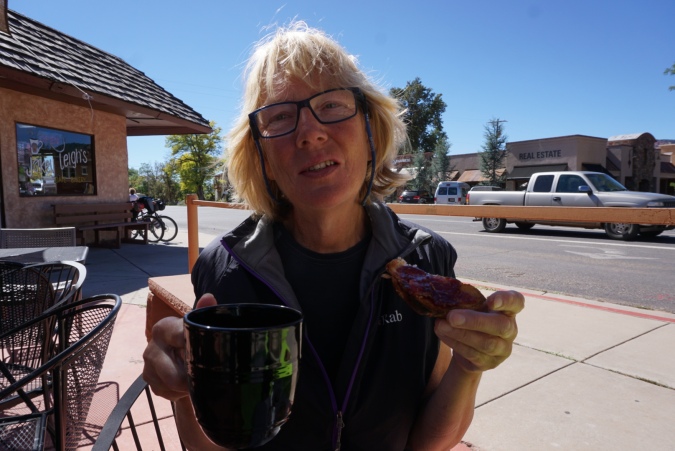 Just south of Kanab we said goodbye Utah and hello Arizona and very soon after hello Fredonia where we stopped.

The motel was the cheapest yet, but not necessarily the cleanest. You often get what you pay for with motels, in this case lots of cats! And lots of cat smell.

A quick shopping trip and we had everything for the next 3 days. For the first time we brought tv dinners and microwaved them. Now it is time to relax and watch the vice presidential debate on tv (Pence and Kane).