Up by 5.30 am and out by 6.00 am that was the plan, we managed 6.10 am so a good effort I think. It did feel very strange to be driving in the dark, at least nobody else really saw just how bad the driving was.

Our route continued down Interstate 70, which we were driving on yesterday, at this time in the morning we saw very few other vehicles. After a few miles the sun began to rise, the landscape looked almost lunar in appearance, a lot of sand and wind worn rock (not that there is much wind on the moon, and we all know it is made of cheese not sand). A brief toilet stop at Ghost Rock where it looked very ghostly in the half light, and just a little bit rocky (cue Survivor song). 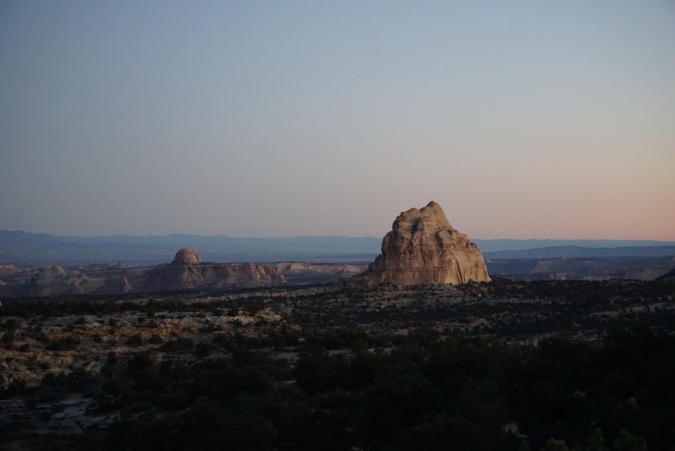 And an early morning car picture. 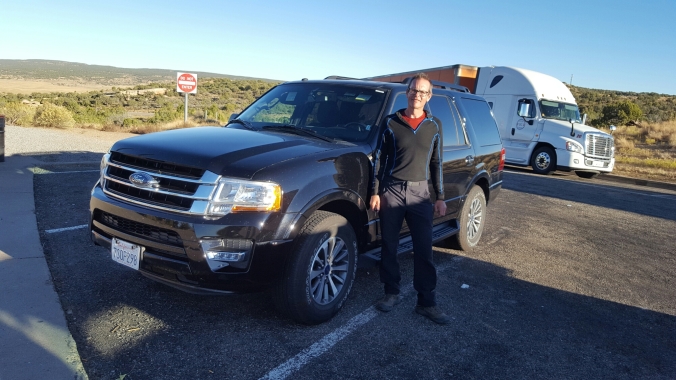 Carrying on we left the I70 and turned south onto the I15, after 50 miles exiting to drive into Parowan, this was the town the maps for our next cycling had been sent to. They had been sent to the Post Office who will hold mail for 30 days for you, and  …. it was there waiting for me (costing $23 for delivery though).

As it was only 9.30 am, it was about breakfast time so a small diner (not dinner! And not 5’3″ either) beckoned and pancakes were the order of the day, covered in butter and syrup. Three was too many for me, as nice as they were, and I had to leave one, Janet easily scoffed one down (a good old word scoffed, not used much now). 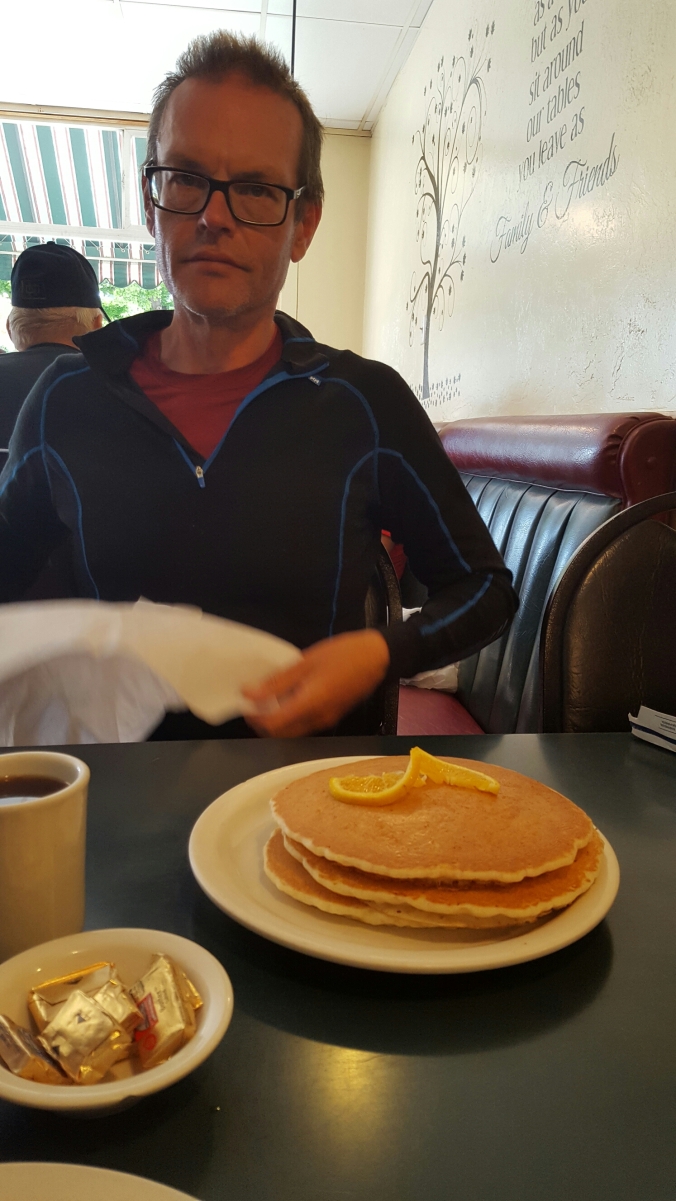 One pancake too far

20 more miles and the car was sadly dropped off at Enterprise in Cedar City. It was a lovely vehicle to drive, perfect for US roads (only 20 to the gallon though!). The bonus was our campground (another KOA another $30!) was only 200 yards away.

A shopping trip to stock up on food for 2 days and a nice steak for tonight (barbecued on our own barbecue) and we felt prepared for more cycling. 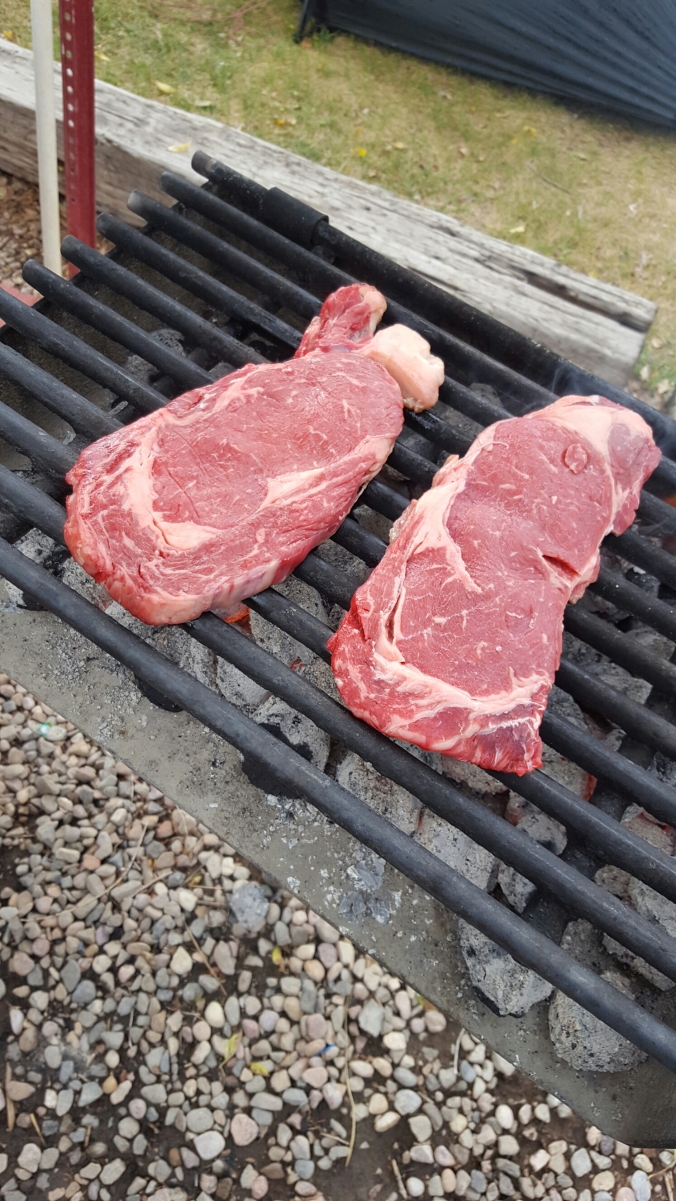 Some bike maintenance, new brake pads on Janet’s bike and tyres now inflated to 60 psi for better rolling on the pavement roads we would be following now.

A good samaritan took hold of me and I helped a man put up his tent, it was obvious he had not done it before and was really struggling.

That was the day gone, nothing else to do but read and sleep. And of course look forward to Zion National Park tomorrow  (maybe tomorrow, if not definitely the day after). 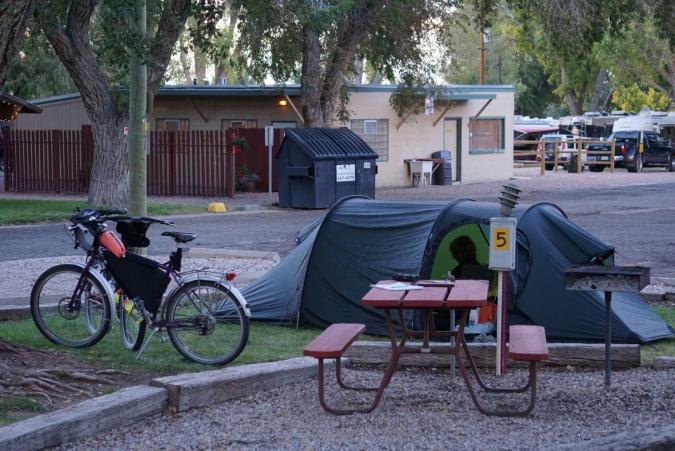 A dark shadowy figure lurks in the tent