We spent a little more time getting ready today, in particular cleaning the water filter as it’s flow rate had reduced a lot.

At around 8.00 we left, the road started well, a short climb up over the railway and under interstate 80 put us on the road much of today would be spent cycling on.

A view down into Rawlins

It was at this point things went awry, the wind was gusting very strongly straight into our faces or as a crosswind trying to blow us into the middle of the road. Also there were thick black clouds queueing up to deposit water on us as well. It was mentally a very difficult beginning to the day, but we battoned down the hatches (a nautical theme today I think) and battled on. Donned our waterproofs (there is a lovely sense of wellbeing you get from being encased in something keeping the elements out) and the world began to seem a better place.

We gained height quite quickly and with it came lovely views. There were some quite dramatic rocks / cliffs. The rain stopped, but the ever present clouds remained (that is why they are ever present) threatening.

After 10 miles the pavement ended and the track began, it was still an excellent surface. It we had been looking for water then disappointment would have occured, it was almost none existant here, just a few very green looking streams.
We were then in the final climb up to the divide crossing,  six miles of a steady uphill, not too steep (or extreemly steep depends on who you are) just relentless. Plod, plod, plod we went on our bikes pitter patter went the rain as it started again, this time heavier. We donned (I think donning something is worth talking about, but putting it on is boring) waterproofs again and all was well, we were as snug as a bug in a rug (or at least until dyson invented that cyclone thing of his).

Janet on the climb up (the small dot on the track)

Oh, the wind was still terrible, I just had to throw this in in case you were losing sympathy (please check the drawer unit in SS1 in case someone has put some in there).

At 30 miles the divide was crossed and then we started a rollercoaster ride of ups and downs, the track remained good, in fact much of it seemed new. 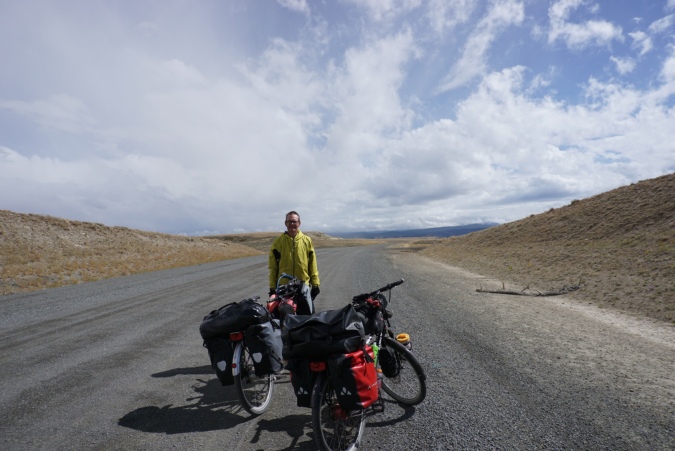 Road blocked by mystery cyclist and his 2 bikes

At 40 miles that was enough so we pitched our tent at the side of the road and made ourselves comfortable.

Just before the storm

As I write this, those ever present dark clouds ganged up into a thunderstorm. Some serious thunder and lightning but we were as snug as a bug somewhere other than a rug in a dyson owning household.

And finally the nautical theme (can you have a theme with 2 things?) finishes with a Moby Dick quote “I know not all that may be coming, but be it what it will, I’ll go to it laughing.”