As the car hire shop did not open until 9.00 and it was 56 miles away (did I mention it was uphill from mile 12 onwards?), I loaded my bike in the back having divested it of anything which would lighten the load, panniers, spares, wheels, …… I then left Janet at the campground.

I refilled the enormous and I mean huge fuel tank with 20 gallons of petrol. It did 17 miles per gallon when we had it. Then returned it.

All that was left was to cycle back. It starts well 12 miles of mostly down including 5 miles on a cycle way, after that it was riding on the shoulder. For the most part it is around one metre wide.

It was actually a lovely ride and without panniers I made good time. The Hoback Valley is very scenic and worth visiting, another time maybe. The valley runs parallel to the Wind River Mountain Range (13000+ ft peaks).

Even here I passed through some very recently fire damaged forest, this whole area must have been closed as a result.

There were several Antelope on the roadside chomping through some farmers crops. This general theme continued as I cycled back.

Meanwhile Janet had been talking to Sandy and Kevin who have their RV on the campground. They took pity on me having to cycle so far so Kevin drove back down 20 miles with a lovely cold lemonade and picked me up. Making the cycle a mere 36 miles. A big thank you.

As the day was still young we were offered a lift into Pinedale (20 miles away) to pick up our shopping for the next few days, how could we refuse?

We had a look around town, replacing Janet’s bottle cage which had broken and purchasing the next 4 days worth of shopping.

On our return we saw a Stoat running around the tent (hopefully not stealing our meagre supplies).

Tonight we brought some barbecue briquettes and two steaks, which were lovely.

Surrounding the campground is sage grass, this smells wonderful when disturbed (unlike me who smells terrible and is very disturbed).

Sandy and Kevin are originally from Minnesota, they have sold up and spent time travelling in their RV, towing a car. Wintering in a condominium in Florida. Their kindness and generosity makes them a special couple thank you for your help and friendship. 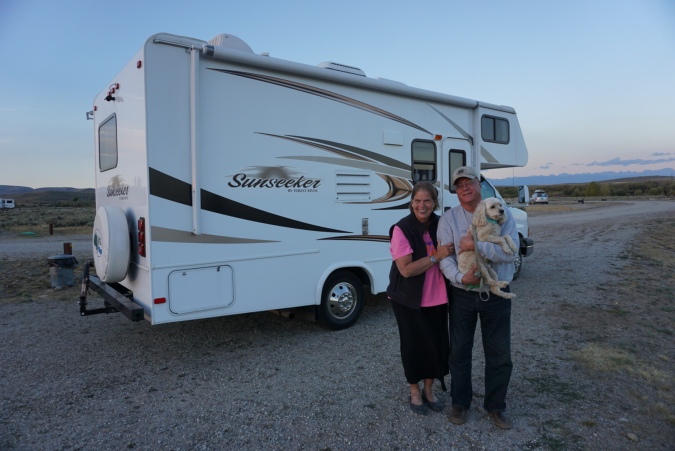