Based on yesterday we anticipated lots of struggle on bad tracks, shockingly it was an early start, up at 6.00, the sun was not even up, just that pre-dawn glimmer.

There was some loud stomping just down from the tent and in the gloom we could just make out a large moose (mother) and her calf. They very quickly noticed us and made a rapid exit, no pictures were taken and I will not amaze you with another artistic representation of a camera shy animal. 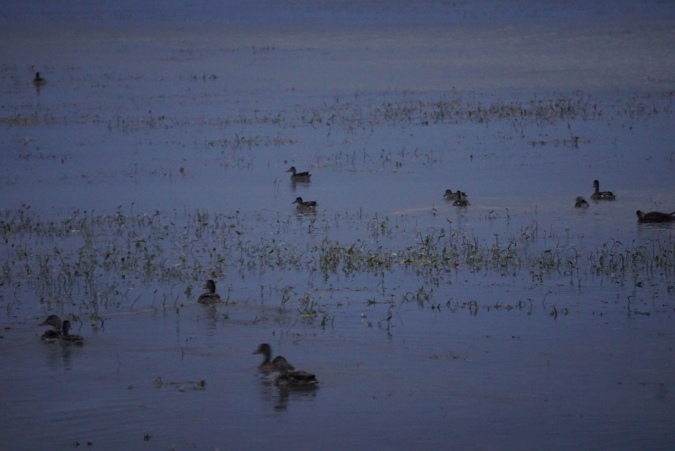 No moose but some ducks who were not so fast

We packed up under a very thundery sky, in fact lightning and great peals of thunder were off to the north, just a few spots of rain on us, we prepared for the worse. 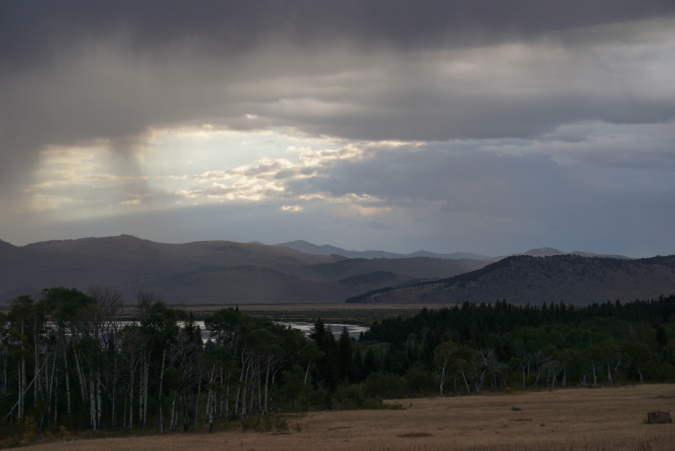 Up on to the track it was lovely to see a shower overnight had dampened the surface and, wait for it … no dust.

The track got a lot better, meanwhile the sun continued its battle with skies heavy with rain, we just pedaled taking advantage of the cool temperatures. The first 10 miles we covered quickly (for us!) with a final short climb and we crossed the great divide again.

This time it was a state change, goodbye Montana and hello to Idaho.

The rock the camera rested on was sloping not the sign!

A very rocky (3 if I remember correctly) descent but enjoyable, the first proper down for a number of days, this led to a paved road, shock!

A blue bird (no really that is what they are called)

A lunch stop at the end of the paved section just before the track gave a short but welcome rest, we only had 5 miles of track and 5 miles of pavement to go now.
The track was a delight, meandering through a forest  (trees for the first time in quite a while).

They even threw in a small stream to ford as well, due to the lack of rain, did I mention the sun had won the battle and we were now baking (cinnamon buns if I am not mistaken) hot? 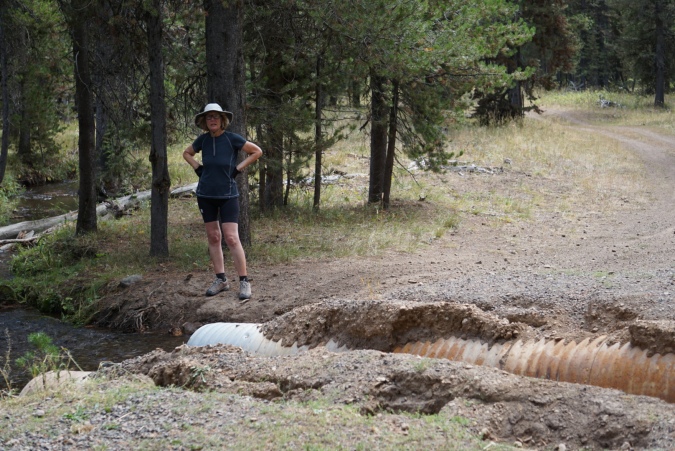 There was a further tarmac section with a lot of property for sale along it if anyone is interested.

We crossed the Interstate 20 where there was a gas station (see how the americanisms just flow naturally now) one very cold drink later and the map was consulted and a park ranger asked, who happened to be filling up his truck with gas (I told you). The decision was made to camp here, there is a large grocery store, showers and wifi. We were not risking travelling further and finding the next campground had no facilities.

We laundered our clothes, tomorrow we will be clean both of body and of garment, nice.

The site is Sawtelle Mountain Resort Motel and RV Campground,  it sounds very grand but it is a large RV park. Sawtelle mountain is just under 10000 ft high and I will take a run to the top before breakfast tomorrow.

The site let us use their telephone to ring ahead about camping, it is labour day weekend. Labour day is the first monday in september, it honors the American labour movement and the contributions workers have made to the country. Fingers crossed it should be ok.

A final shop for tea tonight and 4 days food (very little in the way of anything for a while now, except the natural beauty of Idaho and cycling up a hill). I am not sure how we will carry all of the food!

Finally I had to put this picture in from late yesterday, I quite like it.

The sun beginning to set over Upper Red Rock Lake