First off, Helena is the state capital (Montana you do remember don’t you?). It has a population of 29000 (for reference West Bromwich has a population of 76000). The city started in 1864 with gold being found in Last Chance Gulch (which coincidentally is the name of the road our motel is in). It is pronounced like you say the girls name. This is our destination today.

How about that a blog post starting without me telling you what time we started out, it was 8.30 by the way for those of you nostalgic about the old post era.

It took longer as the tent had to be dried with that rain last night.

Within 1 mile we came across Robin, a lady doing part of the route solo (also happy birthday), and Tom who had not made the pass, just 1 more mile, he was suitably insulted for his lack of commitment. It did prove useful as Robin had booked into Budget Inn Express for $50 a night, it sounded just right so that is where we would aim for as well.

Leaving them behind the climb started in earnest, the rain had made the track surface “squishy” but there was very little surface water (it just goes to show just how dry it had been here, that the rain had little impact).

The highest point was 6480 ft, where a well earned egg break occurred  (hard boiled eggs, these are the best ever trail food).

We dropped down only to head back up to 6000 ft again (we actually crossed the Great Divide twice today). We passed a number of old gold mines, all now abandoned.

All of today we only saw 4 other people, it was a very lonely feeling day. It did mean we saw quite a few white tailed deer (you know, the deer with the white tails). 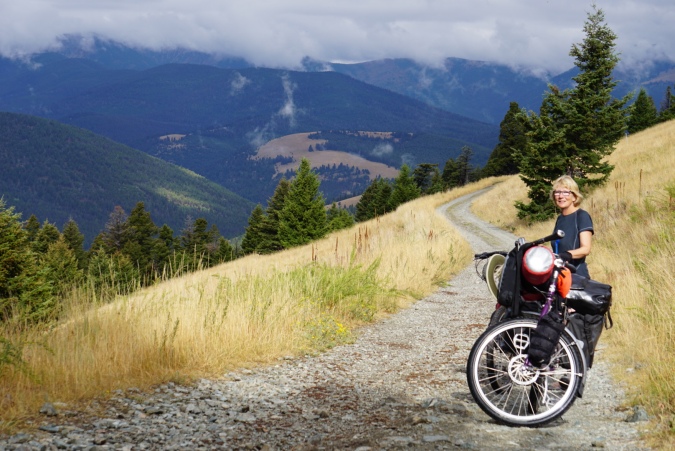 There was a train track running between the divide peaks, most impressive.

The payoff for the huge amount of up was a very nice 5 mile (that is 5 miles without having to pedal) descent.

At the bottom we got a signal for our phone and tracked the motel down, then booked our rooms.

There was a long highway ride to get into town, but we found the motel quickly. Initially we were unsure about it, but it has since proven to be in a nice central spot (remembering everything is half a mile away!).
We ate in, getting food from the supermarket, even watching a little television, the olympics.