We woke very early today, by now we had had enough of the awful instant oatmeal, the peasants revolted. A cold breakfast will do a bolied egg and a nutribar. 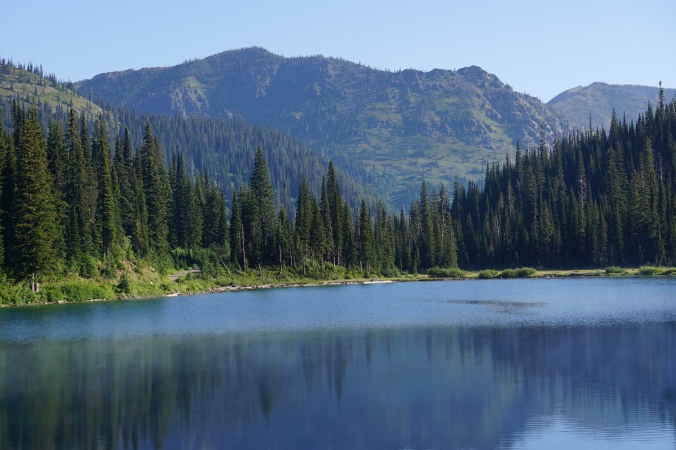 I did have another go a fishing before we packed up the tent, I managed to catch a small grayling and miss a couple of other bites, (unlike the bugs who got a lot more) a good start to the day.

Everything wet in the wet bag, the tent wiped down to remove as much water as possible from it and we are off. It was looking like a lovely day, but as we camped at 5600 ft it was quite cold in the shade. A few more layers and we were off (part 2). We did expect a short steep climb but this was missing, just a lovely down (no complains though).

A nice 4 miles of no pedaling, but some massive ruts carved in the track from yesterdays rain,

there were major flash flood warnings issued for Glacier Park area. We rapidly reached Upper Whitefish Campground  (rapidly is not an often used word on the blog). Just at this time Joy, Sammie and Audrey were leaving the site hello as we arrived and goodbye as we passed them.

We did see a sign no shooting which was full of bullet holes, irony I think. 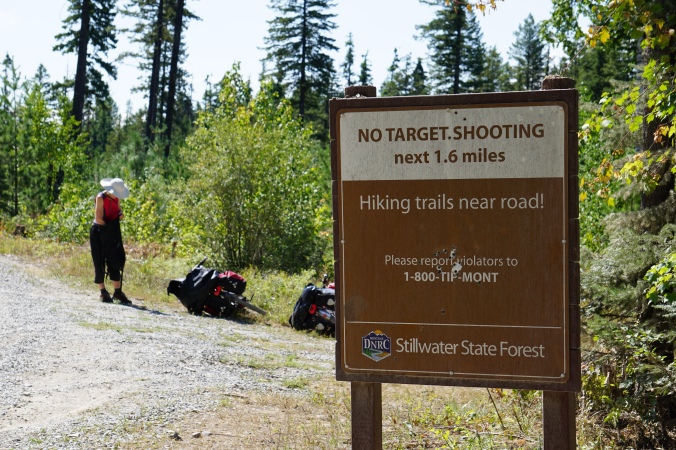 The scenery was as usual fantastic and generally down. Eventually me left the track and met paved road. A very undulating road following Whitefish Lake shore. As we neared Whitefish the road got very busy, the town is a relatively small population but is spread over a huge area, we just kept going and going arriving at the corner of Edgewood Place. It was over the bridge and into the centre of town. 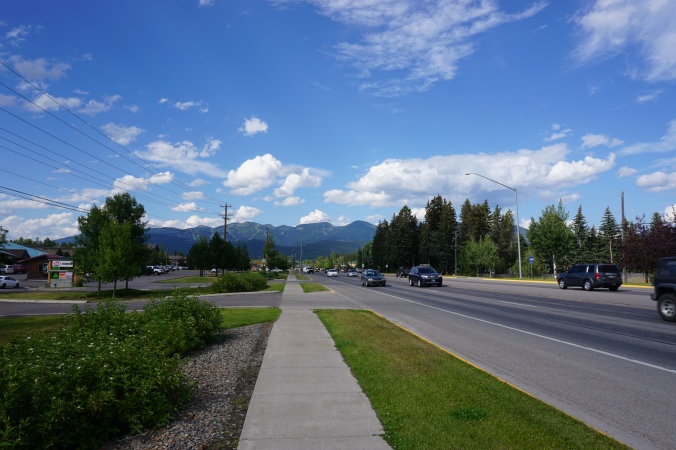 First stop was a look in the large cycle store Glacier Cycles, where the staff told us about all the accommodation options in the town. It was the Whitefish RV Park or Cyclists Retreat  (they would collect you and drop you back in town the next day) we did want to spend time in town so RV park it was. Here we bumped into Joy, Sammie and Audrey who had just finished a pizza,  they we having two days off in Whitefish.

We arranged for some sidestands to be fitted to our cycles as we are getting tired of laying the bike down and picking it up running the risk of damaging the bike or even our backs (just feel the weight of a bicycle fully loaded to appreciate this).

The park was a mile from the centre, but an easy cycle. Lovely showers but rubbish wifi.

We wanted steak tonight so back into town and we settled on Tupelo Grille and has the best steak we can recall eating it was outstanding (the mythical grade only talked about in a hushed tones between teachers), but not cheap (unlike many teachers).

A slow walk back via a huge Safeway and we had breakfast sorted along with donuts and chips (crisps). We also stocked up on bite relief cream, antihistamines and a new repellant which would dissuade something called  a “chigger” from biting you, I have no idea what a chigger is but I certainly do not want a bite from one.