Another early start (you are noticing a theme here are you not, or it could be a lack of imagination on my part). Away at 8.30 and we are noticing a depressing similarity between most campgrounds, the huge hill they all seem to have to get out of them. A last look at the poor battered (who on earth deep fries a sign I will never know!) campground sign. 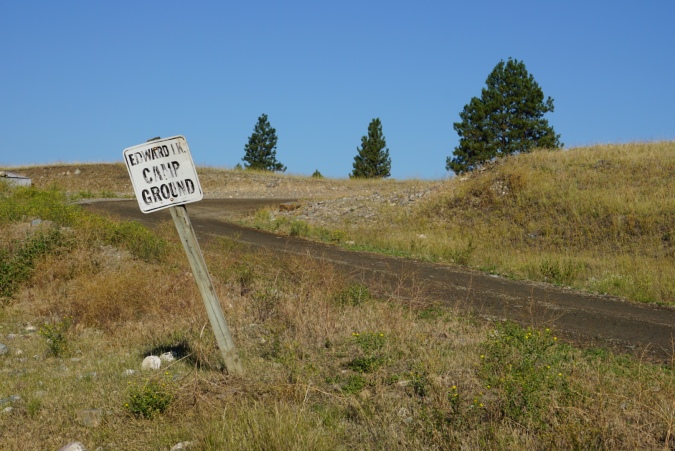 We were straight out on to a proper road, in fact all our journey today will be on tarmac (or paved as we like to say over here).

On our way to highway 93 we saw a Coyote run across the road and up into the woodland off to our left, we had heard them howling last night. No picture I am afraid but a drawing will give you the general idea.

The convenience store at Grasmere was closed (as in boarded up) so no bread there then. Carrying on down the 93, we passed another closed store still no bread. Onwards we went, the border with the USA beckoning to us. At this point a large white tailed deer (you can tell it was one as it looked like a deer does and it has in fact a white tail) lept a 5 foot fence with ease and ran (gracefully bounded) across the highway, a truck and car slowing to avoid it.
We were there at the border, map 1 of the 7 we have now fully traversed, 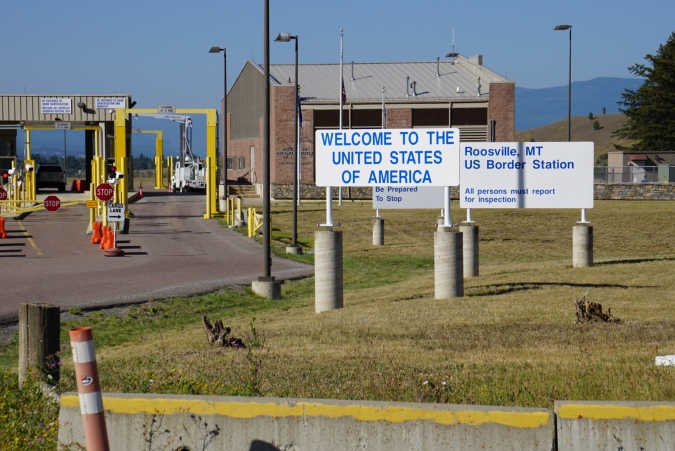 two very big smiles on faces at the moment. We waited patiently at a red light for our turn. I have some very sad news regarding Janet, unfortunately she was not allowed in the USA, the picture explains it all.

We did have to go into the customs building pay $6 each, give fingerprints and a photograph and that was it, we can stay until February next year. A more unfortunate couple on a motorcycle were kept and customs seemed to be taking their motorcycle apart looking for something. I think there are thermal imaging cameras and some kind of x-ray thingummy as well looking at you when you go through.

We cycled into the state of Montana,

very quickly we were on the Airport Road (a very quiet road given its name). This road we cycled in blistering heat, 36 degrees and very little shade all the way into Eureka (no, honestly it is the name of a real town in Montana). Our first gas station in the USA and we clutched ice cold bottles of tea (Janet) and gatorade (Martin) and $2.88 lighter in pocket, just what was needed.

The town of Eureka is not on a slope, I had to move quickly to avoid a car related incident

to the town hall on the other side of, well, the town. Where we asked about showers, burgers and supermarkets,  we could use the shower in the town hall (which we did), the supermarket was close to the burger bar. The burger bar was called Vans and offered the best burgers in town, two large ones with fries later and we wobbled to the supermarket and got 4 days worth of food, for the next 4 days.

We left town a 3.00 pm for a final 12 or so miles to Grave Creek Campground. By this time it was so hot you could have fried an egg on a rock, our eggs we had hard boiled and couldn’t find a rock so it still remains an urban legend. 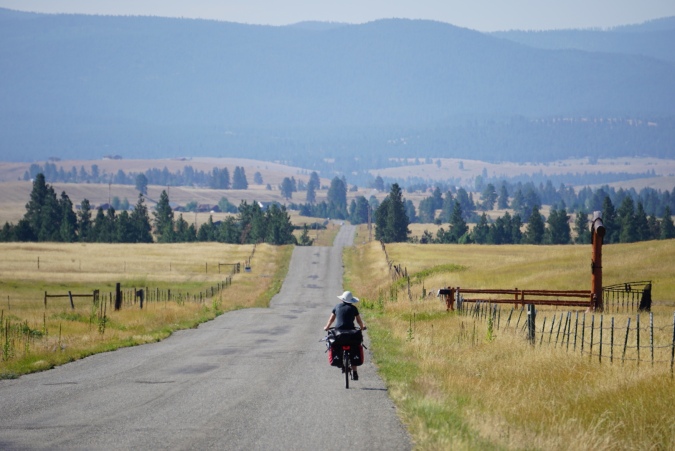 A very steady climb and a view of more deer with white tails then we were there, very weary but all tented up (not on an official plot as they were all taken but a nice flat piece of ground need the creek).

By the way if anyone is interested there seems to be an enormous amount of land and / or property for sale in the area, quite low prices I gather.

There was some bear poo but it was not fresh, taking no chances I went and spoke to an official plot camper close by and used their bear bin for our food and toiletries.

Some facts about today, 36.6 miles ridden (nope not even a push today), 1578 ft of climbing at an average (I’ll leave you to ponder which average I am talking about) speed of 3.8 mph.